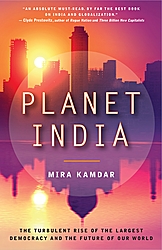 Planet India
The Turbulent Rise of the Largest Democracy and the Future of Our World
by Mira Kamdar
Buy This Book via Amazon.com

India is everywhere: on magazine covers and cinema marquees, at the gym and in the kitchen, in corporate boardrooms and on Capitol Hill. Through incisive reportage and illuminating analysis, Mira Kamdar explores India’s astonishing transformation from a developing country into a global powerhouse. She takes us inside India, reporting on the people, companies, and policies defining the new India and revealing how it will profoundly affect our future — financially, culturally, politically.

The world’s fastest-growing democracy, India has the youngest population on the planet, and a middle class as big as the population of the entire United States. Its market has the potential to become the world’s largest. As one film producer told Kamdar when they met in New York, “Who needs the American audience? There are only 300 million people here.” Not only is India the ideal market for the next new thing, but with a highly skilled English-speaking workforce, elite educational institutions, and growing foreign investment, India is emerging as an innovator of the technology that is driving the next phase of the global economy.

While India is celebrating its meteoric rise, it is also racing against time to bring the benefits of the twenty-first century to the 800 million Indians who live on less than two dollars per day, to find the sustainable energy to fuel its explosive economic growth, and to navigate international and domestic politics to ensure India’s security and its status as a global power. India is the world in microcosm: the challenges it faces are universal — from combating terrorism, poverty, and disease to protecting the environment and creating jobs. The urgency of these challenges for India is spurring innovative solutions, which will catapult it to the top of the new world order. If India succeeds, it will not only save itself, it will save us all. If it fails, we will all suffer. As goes India, so goes the world.

Mira Kamdar tells the dramatic story of a nation in the midst of redefining itself and our world. Provocative, timely, and essential, Planet India is the groundbreaking book that will convince Americans just how high the stakes are — what there is to lose, and what there is to gain from India’s meteoric rise.

India is the world’s fourth-largest economy.

By 2034, India will be the most populous country on Earth, with 1.6 billion people.

India’s middle class is already larger than the entire population of the United States.

One out of three of the world’s malnourished children live in India.

India is home to the biggest youth population on earth:

India just edged past the United States to become the second-most-preferred destination for foreign direct investment after China.

By 2008, India’s total pool of qualified graduates will be more than twice as large as China’s.

India is the largest arms importer in the developing world.

American corporations expect to earn $20 to $40 billion from the civilian nuclear agreement with India.

In 2007, there are 2.2 million Indian Americans, a number expected to double every decade.