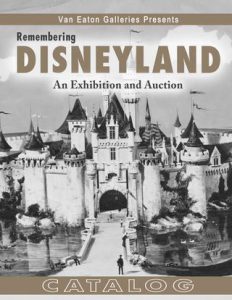 FROM A RARE 1954 ORIGINAL DISNEYLAND PROSPECTUS TO AN ORIGINAL MAIN STREET U.S.A. KEYSTONE COP COSTUME, OVER 800 ITEMS WILL BE OFFERED TO THE PUBLIC

Los Angles, California – (December 12,  2017) – “Remembering Disneyland,” a highly-anticipated public auction of over 800 rare and original items chronicling the history of Disneyland will take place on Saturday,  December 16th at Van  Eaton Galleries in Sherman Oaks,  California beginning at 11:00 a.m. PST.   Van Eaton Galleries is located at 13613 Ventura Blvd. With memorabilia pre-dating the opening of the park, to expansions into Florida, Tokyo, and Europe and beyond, the auction is an unprecedented glimpse into the world-wide phenomenon known as Disneyland.    There are over 800 items to hit the auction block with bidders from around the globe already registered to take part.

“There is something for everyone in this auction. It’s also very special because most of the items in it come from people that actually worked at the park, or had a hand in creating it,” said Mike Van Eaton, Co-Founder of Van Eaton Galleries.

The massive collection also includes memorabilia from Walt Disney World, EPCOT, Tokyo Disneyland, and Disneyland Paris. From signage, vintage souvenirs, original artwork, records, documents, magazines, costumes and other items from the earliest days of the park, bidders from around the globe will find a wide range of items to enjoy.

For over 60 years, Walt Disney’s Disneyland has influenced popular culture and built generations of loyal enthusiasts across the globe. Fans and collectors of Disney memorabilia have made everything from simple toys to actual props and artwork from the parks among the hottest collectibles in the world to date.