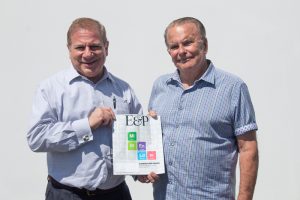 Duncan McIntosh, president and group publisher of the Duncan McIntosh Co., Inc. and owner of Editor and Publisher (E&P), has announced today the sale of the trade magazine to media consultant Mike Blinder and a newly formed company: The Curated Experiences Group. The sale closed on Aug. 30. Terms of the transaction were not disclosed. Jeff Gruenhut of Grimes, McGovern & Associates represented McIntosh in the sale.

E&P is the authoritative journal covering all aspects of the newspaper industry, including business, newsroom, advertising, circulation, marketing, technology, online and syndicates. The magazine dates back to 1884 when The Journalist, a weekly, was founded. E&P was launched in 1901 and merged with The Journalist in 1907. E&P later acquired Newspaperdom, a trade journal for the newspaper industry that started in 1892. In 1927, E&P merged with another trade paper, The Fourth Estate. In 2010, McIntosh purchased E&P from Nielson Co., reviving the magazine after it had closed.

“With all our media holdings at DMC, I am particularly proud of E&P with its 135-year-old heritage as the voice of the news publishing industry,” said McIntosh. “I pass along the legacy of this great publication into the hands of a man I am confident understands E&P’s importance. Mike is a man of boundless energy and ideas so I feel good that passing the baton to him will inject vibrancy into E&P to continue its mission as the authoritative voice of news publishing.”

With a background in radio and television, Blinder eventually made his way into print and started one of the first digital newspapers in the U.S. He resides in Tampa Bay, Fla., and for more than 20 years, he has worked with numerous newspaper groups through his media consulting firm The Blinder Group.

Speaking about his new role, Blinder said:  “I have a lot of respect for Duncan. Nine years ago, just after the start of the recession, he stepped in and rescued E&P from the Nielsen chopping block. Even with its substantial resources and its Scarborough Research tie-in to the newspaper industry, Nielsen had given up on E&P. With his amazing team, Duncan was able to not only keep E&P publishing, but build on that respected brand and grow its relevance to all news publishers.”

Looking ahead, Blinder wants E&P to continue being the go-to resource for publishers when it comes to implementing successful sales and business strategies, and he plans to expand the E&P brand onto other platforms such as podcasting and voice, while delving into deeper issues regarding news publishing including freedom of the press and the power of local journalism.

Nu Yang, former managing editor, will serve as the magazine’s new editor-in-chief, and former assistant editor Evelyn Mateos will now serve as managing editor. The October 2019 issue will be the first under the new ownership.

“I learned a lot about the news industry during my eight years working with Duncan, and I’m excited to see where Mike takes E&P to next,” Yang said. “After helping newspapers for more than two decades, Mike understands the needs and wants of the news publishing audience, and I know he’s passionate about the industry.”

In addition to the monthly print magazine, daily email newsletter, and website, E&P also produces the Newspaper DataBook and the EPPY Awards (the new ownership will not affect the 2019 EPPY Awards, which is already underway).

Authors And PEN Outraged at Attacks on French Magazine -2015

Borders Beefs Up Book Clubs In Store and Online