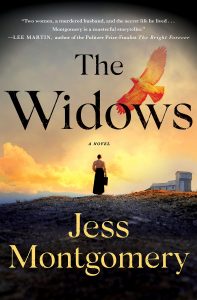 Every writer knows that idea that won’t leave you alone, that book that begs to be written. For Jess Montgomery, that idea started with a picture of Maude Collins, the pretty, petite, even demure-looking woman who became the first female sheriff in Ohio circa 1926, after her husband died in the line of duty.

“The idea grabbed me by the soul, the heart…”

“The idea grabbed me by the soul, the heart, and the head and wouldn’t let me go. Her husband was killed in the line of duty. There was no mystery there, but I began to think what if we didn’t know who the killer was,” said Montgomery.

Thus began her quest to create “The Widows”, a character-driven historical novel that explores issues of women’s rights, temperance and the importance of paying labor a fair wage. The story is told through the lens of Montgomery’s creations, Sheriff Lily Ross and labor organizer Marvena Whitcomb.

The Widows is book one of two in the Kinship Historical Mystery series.

Jess Montgomery is a pen name for a writer whose last book was a literary coming of age novel set in Alaska. She picked Montgomery because she lives in Montgomery County in Ohio and wanted to pay homage to the area’s arts council for grants that supported her writing. She found Jess from the Social Security database of popular baby names by looking for a name that would be youthful and appealing.

Montgomery started writing “The Widows” in 2013, searching for the right point of view from which to tell the tale. “As I was writing from Lily’s point of view I felt like the first forty or fifty pages was flat. I was writing about this woman struck by tragedy and grief and I figured out that she wasn’t going to know all she needed to know to solve the mystery of her husband Daniel’s death. Lily and Daniel had secrets,” said Montgomery.

She experimented by writing 100 pages from Daniel’s point of view as his life flashed before his eyes and felt that it came off as fake and forced. That’s when she developed the character of Marvena, inspired by Mary Harris Jones, the labor organizer known as Mother Jones.

“Marvena is really important in Daniel’s life and knows the other half of his life that Lily doesn’t know. I knew Mother Jones had been near this area of Ohio urging miners not to rise up in battle,” said Montgomery.

With the two narrators in place, Montgomery was faced with the challenge of making sure the plot was conveyed clearly as she alternated between the two voices. She used spreadsheets, sticky notes and a large piece of paper to track the plot’s progression.

“I worked more intensely with my agent on this book than any of the others.”

“I worked more intensely with my agent on this book than any of the others. We did three major drafts, and I worked with a developmental editor on pacing and voice,” said Montgomery. “Elisabeth (Weed, her agent) helped me think bigger and be braver.”

The result is a book that explores how to balance individual desires with community needs.

Montgomery, who has roots in Eastern Kentucky, drew on the dialect, food, traditions, and music of her relatives and relished the opportunity to write about women in rural, Middle America, who are often overlooked in literature.

“I drew on the spirits and attitudes of my own grandmothers and aunts. I traveled to southeast Ohio coal mining towns (known as Little Cities of the Black Diamonds) and went to museums and talked to people. I interviewed an uncle who was a coal miner and asked my father about guns and hunting. I also used the Firefox series of books for details about crafts and how people lived off the land,” said Montgomery.

She used JSTOR, a digital library of academic journals, books, and primary sources, to research prohibition laws of the 1920s and read books including “When Miners March” and “The Battle for Blair Mountain.”

She guided her exploration of character with the questions: who are they afraid of and what are they made of?

“Historical novels give readers the space to explore issues that remain relevant today,” said Montgomery. She noted that many of the same battles for women’s equality and worker’s rights are being fought today.

Montgomery fuels her writing practice by starting first thing in the morning and spends her afternoons on the business end of writing (proofreading, copy editing and answering e-mail).

When writing, she turns on acoustic movie soundtracks. “I find that music that swells and builds emotionally has made me braver as a writer. I write as over the top as I want to, knowing I can revise later.”

Montgomery, who writes a column about the Dayton, Ohio writing scene and teaches at a low residency MFA program, advised writers to read widely outside their genre and read books that are well beyond their skill level to push their growth as a writer. “I couldn’t have written “The Widows” when I started. It takes a long time to get there. You have to be willing to leave your ego at the door and become a lifelong learner.”

Montgomery is currently finishing a draft of the second book of the series, which will be titled The Hollows.

About the Author: Jess Montgomery is the author of the Kinship Historical Mystery series. Under her given name, she wears several other literary hats: she is a newspaper columnist, focusing on the literary life, authors and events of her native Dayton, Ohio for the Dayton Daily News; Executive Director of the Antioch Writers’ Workshop at University of Dayton; and is an adjunct mentor in the Seton Hill University Low-Residency Writing Popular Fiction M.F.A. program.

Looking for Meaning in THE MARBLE ARMY