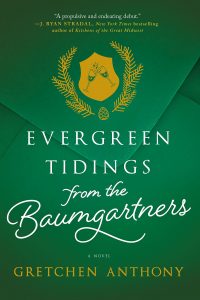 Evergreen Tidings from the Baumgartners,

Christmas letters don’t always paint a true picture of a family’s life. Violet Baumgartner wanted her letters to represent her family’s excellent achievements each year, but families and friends don’t always cooperate. When everything seems to be going wrong starting at her dear husband Ed’s precisely planned retirement party, Violet tries desperately to keep control. But it slips from her grasp like a melting ice cube, what with a concussion, a baby with who-knows-who for a father, a-who-swung-the first-punch and a friend’s husband’s mysterious disappearances just for starters in a crazy year.

“I realized, a person brazen enough to write like that would make a great character.”

ANTHONY: My family has always loved Christmas letters and every year, my dad and I used to sit in the living room and read the most entertaining ones aloud. As everyone who receives holiday letters knows, there are always a few gems in the pile (she said politely). Over time, the voices in those most memorable letters came together in my head and I realized, a person brazen enough to write like that would make a great character. That eventually became Violet, the overbearing, perfection-seeking matriarch at the center of the story. If she had her way, the whole world would believe the story she spins about her wonderful, talented, humble family.

AUTHORLINK: Can you talk about the structure of your novel? How did you decide on a prologue and epilogue, various announcements and newspaper articles between chapters and, of course, the evergreen tidings?

ANTHONY: When I first conceived of the book, I considered writing it as an epistolary novel, the story of Violet’s life as told through her Christmas letters. But as I dug into the first draft, that structure didn’t give the other characters enough space in the overall story. Additionally, I wanted to demonstrate how very different people’s public and private lives can be, which an epistolary structure didn’t allow for, either. Eventually, I realized that the letters—plus other elements (newspaper clippings, etc.)—were a great way to demonstrate the contrast between public projection and private reality that I was striving for. They allow readers to see what Violet would ask them to believe and compare that to what’s actually happening with her family on the page.

I added the prologue and epilogue in later drafts as a shortcut to introduce and then tie up all the sub-plots scattered throughout the story.

AUTHORLINK: Among all the characters, how did Richard turn out to be the third point of view after Violet and Cerise?

ANTHONY: Richard serves two purposes. Mainly, he’s there for dramatic balance. Violet is such a strong character that the narrative needs an equally powerful voice to occasionally stand in her way. Personalities like hers demand a constant stream of obstacles to overcome and Richard, her best friend’s husband, constantly thwarts Violet’s plans by prioritizing his own needs.

Richard also furthers one of the book’s main themes—that people aren’t always what they seem. Readers know he’s up to something, but it’s unclear what that is. As the book unfolds, even Richard surprises himself, ending up in a very different place professionally than he expected.

AUTHORLINK: There is also kind of another “point of view” character. How did you bring out the essence of Minnesota characteristics? (asks a former Minnesotan)

ANTHONY: I think of Minnesota culture like a code—passive aggressive, humble-braggy and ostentatiously frugal. Growing up here, I learned the culture like a second language. And then (gasp!) I moved away. For nearly twenty years, I’d come home to visit and have to remind myself what all the subtleties meant. Now that I live here by choice, I’m thankful for the perspective. It was the distance I gained living elsewhere that enables me to translate our hyper-modest personalities for those who aren’t lucky enough to live here. Minnesotans drive themselves so crazy with neuroses, they make for great characters.

AUTHORLINK: I think it’s interesting that you have mentioned that it’s your job to read. I tell people that my job (?!) is reading novels. How do you use reading to help you?

ANTHONY: Reading other writers’ work is like professional development training. It allows me to discover new techniques, it challenges the assumptions I make in my own writing and causes me to take risks in my own work. Plus, who doesn’t want a life filled with great books?

“I wrote a number of full and partial manuscripts over the years and abandoned each one of them.”

AUTHORLINK: Did you write other (unpublished) novels before this one? How did that help you to develop your craft? What other help did you have as your writing developed?

ANTHONY: I wrote a number of full and partial manuscripts over the years and abandoned each one of them. Some were boring, some had plot issues, so had indistinct characters. None of them were good enough to pitch to agents. But cumulatively, they taught me how to write a novel. By the time I wrote this book, I’d made enough mistakes to recognize that I finally had something that worked.

I found writing workshops, particularly those focused on writing novels, to be the most helpful along the way. From those classes, I learned how to plot, developed confidence in my voice, and met the critique partners with whom I still work today.

AUTHORLINK: What do you think the antics and relationships of the Baumgartners and their friends can teach is about our own relationships?

ANTHONY: At every book event I do, readers tell me they loved Violet and hated her, that they rooted for her and just wanted her to shut her mouth. I think that’s why they resonate with the Baumgartner family—we all have people in our lives who we love, but who drive us absolutely crazy.

As a young parent, I read somewhere that when we get angry with our children, the response is often driven out of fear. We bark, “Be careful!” when we fear for their safety, or nag about homework out of concern for their grades. We just want them to be okay!

That’s how I see Violet. She so badly wants her loved ones to be happy that she lives in fear—Is she doing enough? What is she overlooking? What would happen if she let her guard down? She is driven by a love so deep, she can’t help but go to extremes. When readers recognize that, they connect with her character in a whole new way.

ANTHONY: My next novel, The Kids are Gonna Ask, is about seventeen-year-old twins who become a national sensation after they start a podcast to find their biological father after their mother dies. It is scheduled for publication with Park Row Books in May 2020.

About the Author: Gretchen Anthony has been a ghost writer for CEOs, doctors, superstars and barbecue pros following a career in management consulting and corporate communications. In her own name, she has been featured on scarymommy.com, medium.com and thewritelife. Her first novel has been on Best Books lists on Amazon.com and PopSugar.