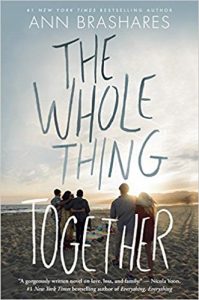 In her debut book, The Sisterhood of the Traveling Pants, Ann Brashares’, the New York Times best-selling author, introduced four young best friends which readers absolutely loved. That first novel and its sequels, have sold more than eight million copies worldwide and been made into Hollywood blockbuster films.

With her new book, The Whole Thing Together, the stories of main characters, Sasha and Ray are just as relatable. They’re both teenagers who have shared a room their entire life, but they’ve never actually met. Years ago, Ray’s mother and Sasha’s father were married, had three daughters and owned a summer home in Long Island. When the marriage ended the bitterness lingered and the beach house was shared. Now there are two new families who relive its’ memories, happy and sad, of summers past.

AUTHORLINK: Ms Brashares, thank you for sharing your time with Authorlink today. Your books have been described as “the kind that raise you, like your cool older sibling.” Your bestselling debut, The Sisterhood of the Traveling Pants (2001), a young-adult novel came out more than 16 years ago followed by a five-novel sisterhood series and two blockbuster movies. Do you hope the stories of Sasha and Ray, the main characters in The Whole Thing Together, are just as relatable as the four girls of the sisterhood? How did they first form in your mind?

BRASHARES: Some readers have told me they feel like the sisterhood is like four parts of a single person, and I agree with that to some extent. The four girls came alive for me in unison. They are individuals first and foremost, but they were born in relationship to one another. That’s also true of Sasha and Ray. Together they form a unit. They grew up on opposite sides of a divided family, like equal weights on a scale, and a whole spectrum of possibilities exist between them. I hope they are relatable, both together and apart, as I hope the girls of the sisterhood are.

AUTHORLINK: We understand your parents divorced when you were young and that The Whole Thing Together is loosely based on the divisions still present today. Do you think stories about healing past emotional wounds give readers hope? Was writing this book a cathartic experience for you?

As a writer, you can try to make sense out of the shapeless, haphazard complexity of life by capturing it in the form of story.

BRASHARES: As a writer, you can try to make sense out of the shapeless, haphazard complexity of life by capturing it in the form of story. You can conjure the messy feelings, but control and condense the environment in which they reign. The characters in this story achieve a sense of completion I have not found in my life. But then stories end and life (hopefully) goes on. In one way that completion can be chalked up to wishful thinking, but it sure takes the characters a lot of pain to get there.

AUTHORLINK: And I imagine the authors! What were the most difficult aspects as well as the easiest about writing The Whole Thing Together? Who was your first reader and later who edited the book?

BRASHARES: Trying to figure out Quinn was probably the hardest part of writing this book. She is a character who resists being figured out or reduced, and I appreciate that about her, but it was hard to get her down on the page. Probably the easiest character to write, weirdly, was the girls’ father, Robert. I don’t know why. He drew me through many scenes.

My first reader was my dad. I kind of resisted giving him the first draft, because of the content and all, but he was incredibly insightful and helpful. My editors, as with all of my YA books, are Wendy Loggia and Beverly Horowitz at Random House, and they are tremendous.

AUTHORLINK: Thank you for sharing that. Your first adult novel, The Last Summer (of You and Me) was released in 2007, and your second, My Name is Memory (2010) has been optioned for film. This was followed by a young-adult time travel novel, The Here and Now (2014) and another young-adult novel in The Whole Thing Together which was released this year. What would you say are the most challenging aspects of writing in the young-adult genre compared to writing for older audiences and vice versa?

BRASHARES: I don’t make real distinctions, in terms of my approach to writing, between books targeted to young adults or older audiences. I focus on the characters and the story I’m trying to tell. A character’s age is certainly an important part of who she is, but the eventual genre of the book isn’t so meaningful to me.

AUTHORLINK: That’s interesting (and wonderful). You once said that every time you go to a bookstore, it could destroy your confidence because you’re surrounded by brilliant books. What advice would you give to a writer that is just starting out?

BRASHARES: Don’t go to bookstores too much while you are writing!

AUTHORLINK: Ha yes! You have suggested that young-adult fiction is so strong right now because in adult publishing they make too much of a distinction between ‘literary’ books and ‘story’ books – books that are commercial – but you feel that young adult doesn’t separate like that. Is this correct? Would you kindly elaborate on this?

You should write what you write, read what you read, and love what you love

BRASHARES: I still think that is roughly, or at least partly, true. In my experience, YA writers and readers don’t care that much about genre or whether a book is “literary” or not. You should write what you write, read what you read, and love what you love. Any kind of book, whether it is fantastical or horrific or romantic, can be good or bad or great. There is no pecking order in YA fiction, and I think that’s pretty liberating for readers and writers.

AUTHORLINK: Yes, it is liberating, quite true. The Whole Thing Together is written in an almost third person omniscient. What is it about this point-of-view (POV) that you particularly like? Is it difficult to write it this way?

AUTHORLINK: How do you cope with negative feedback or reviews?

I can let one hundred positive comments slide off my back and fixate on one negative one. I hate that about myself, but there it is.

BRASHARES: I take them entirely to heart and feel bad. I remember them too well for too long. I can let one hundred positive comments slide off my back and fixate on one negative one. I hate that about myself, but there it is.

AUTHORLINK: Then perhaps it’s time to say goodbye to them? You have made so many people happy with your writing! Ms Brashares, thank you so much for the chance to talk to you about The Whole Thing Together. We wish you all the very best for your next book and can’t wait to read it!

About the Author: Ann grew up in Chevy Chase, Maryland. She was an editor before she became a full-time writer with her first novel, The Sisterhood of the Traveling Pants (2001) which became an international best seller. It was followed with three more titles in the “Pants” series and later, 3 Willows: The Sisterhood Grows (2009).

The first book in the series was made into a film in 2005, and a second film based on the other three titles in the series was released in August 2008. Brashares’ first adult novel, The Last Summer (of You and Me) was released in 2007. A second novel for adults, My Name is Memory was published in 2010 and has been optioned for film. Ann followed this with a young-adult time travel novel, The Here and Now (2014) before she published The Whole Thing Together this year. 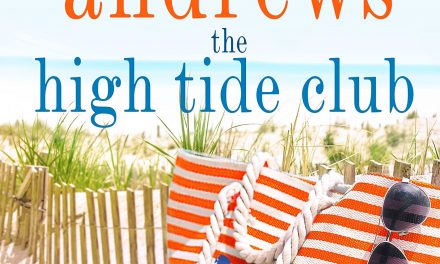