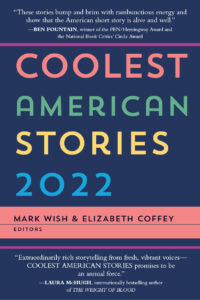 For new writers, short story anthologies are a wonderful way to explore a range of styles and get a sense of what editors are looking for in contemporary fiction. For spouses, Mark Wish and Elizabeth Coffey developing an anthology was a way to help keep the short story form alive and offer something new and interesting to readers. They created Coolest Stories Press and put out a call for Coolest American Stories 2022, which was just released. They share their process here:

Coffey: Since Mark and I met back in 1995, we’ve read thousands of short stories published and unpublished. We’ve both long enjoyed the short story form, and Mark’s having taught Creative Writing at CUNY, where he was Fiction Editor for New York Stories, and then his position as a Contributing Editor for Pushcart have meant piles of stories have roomed with us wherever we’ve lived. For years we thought starting yet another small press of any sort would be insanity, but within the past few years we began to notice that published short stories were losing their fizz; magazines were publishing fewer of them that ran more than a few pages; and the short story form as we’ve known it (as embraced by authors such as Flannery O’Connor, Raymond Carver, and Alice Munro) was becoming an endangered species. Worse, book-buying readers we knew personally, as well as two of Mark’s agents (both of whom kept asking Mark to write crime novels rather than more short stories) were reporting that the typical reader out there saw the short story genre as increasingly boring. Worse still, the January 6, 2021 attempt to overtake the Capitol happened, which suggested to us that perhaps some Americans might have a thirst for peaceful, positive ways to occupy their free time. So we founded Coolest American Stories.

Wish: To be clear, we know that most people would consider it a pipe dream to think that one annual anthology of the most interesting, compelling, widely appealing short stories in America could solve America’s political woes. I’ll also own up to being the one who conceived the notion of Coolest first—and I convinced Elizabeth that we should invest time and money into it. The day after the January 6th insurrection, we were both rather upset (I used to write correspondence for a Congressman and would visit that building all the time, so on January 7 I was freaking out significantly), and Covid was in the air—and, maybe because I had this “do something now or things will get even worse in your life” feeling that morning, I clung to the idea of starting something bright and beautiful that more than just the privileged, educated elite (who lived all around us—that is, unless one walked another ten blocks uptown, into Harlem) would find of worth. It was extremely cold and icy that morning, and we were walking in Riverside Park, avoiding aggressive unmasked people and scared masked ones too; I’m not sure if that helps you understand why the idea struck me then, but, well, to me that morning, fighting back against what was going on politically in America by starting Coolest made a kind of sense.

Authorlink: What criteria did a story have to meet to be considered coolest?

“So far, we’ve taken time to personalize our rejections…”

Coffey: Interesting, compelling, widely appealing. So far, we’ve taken time to personalize our rejections, and we’ve typed those four words a lot in the past year.

Wish: With the keyword being “interesting.”

Authorlink: How were the stories selected and by whom?

“And pretty much every time one of us found such a story…we’d sit there either teary-eyed or dead silent or both.”

Wish: That aspect of publishing Coolest 2022 was fairly simple. One of us would be reading a story and would call across the apartment to the other something like, “Uh, I think we have one here.” I mean, in my experience, at least in 2021, there was nothing whatsoever “subjective” about deciding that a story would or would not appeal to readers across America and from all walks of life. A story that could do this would leap off the page compared with the others we’d been reading; it would put you in this sort of trance wherein you had no doubt that many other readers would be wowed into reading all the way to the end like you were. And pretty much every time one of us found such a story, we’d sit side by side reading it together on a laptop screen, from start to finish without saying a word, and after we’d both finish, we’d sit there either teary-eyed or dead silent or both.

Coffey: Of course, there were a few stories that had this mesmerizing effect on us until, say, two-thirds of the way through, after which the author had either choked under the pressure, been told to do something “safe” by a workshop, or—well, who knows what happens when a compelling story goes off the rails. In the case of these few stories, we’d ask the writer to revise, sometimes suggesting a path for the plot to end in a way that we thought readers from all walks of life would enjoy. Sometimes the writer would agree happily; other times, not so much.

Wish: I lost at least three Facebook friends that way.

Coffey: One of whom you’ll certainly never get back. But there are at least three stories in Coolest 2022 for which the author tried another run at a more interesting, compelling, “cooler” ending, and at least one of those stories is being mentioned a lot by advance reviewers/readers as the story they liked most. And I have to say, that whole process—the processes of a writer and us agreeing upon how to make a story appeal to many readers rather than just to ourselves—that might be the most rewarding aspect about having published Coolest 2022.

Authorlink: Tell me about the choice to publish these independently versus going through an established press.

Wish: That’s pretty easy. We came up with the idea for Coolest American Stories on January 7, 2021, and we wanted the first volume to appear in January 2022—and, well, anyone who knows what it’s like to deal with agents and publishers these days would have made the same decision: Publish the thing yourself.

Authorlink: What drew you to these particular stories?

“What drew us to all thirteen [stories] is that we felt…that lots of readers…would find them interesting, compelling and appealing. “

Coffey: What drew us to all thirteen is that we felt—significantly, in a visceral way, we couldn’t deny—that lots of readers, including readers from “flyover country,” where we were both born and raised, would find them interesting, compelling, and appealing.

Authorlink: As married co-editors of the anthology did you have any major differences when it came to the anthology? If so, how did you resolve these?

Wish: I’ll let you answer that one, E.

Coffey: No major differences when it came to which stories to include. Those thirteen stood well above virtually all of the manuscripts and published stories we’d read.

Wish: You don’t want to talk about…how shall I say this, time allotment?

Coffey: Oh. Right. Well, I do have a full-time job, so there were some early morning discussions that needed to be cut short because I had to get ready for work.

Wish: And there was also our own fiction. Elizabeth was—somehow—also working on her first novel in 2021, and I was, for a while there, trying to get my most recent novel published.

Authorlink: How do you think the modern short story is fairing in the current political/social/economic climate?

“…the short story genre now faces extinction. So we’re trying to resuscitate the genre with Coolest.”

Wish: As I might have begun to touch upon earlier, we think the political discourse today impacts the short story negatively like this: The most privileged, most expensively educated Americans sit back and choose which short stories appear in the most “prestigious” (yet barely read) journals, causing the short story genre to become something generally undesirable to 95% (99%?) of book-buying readers. Considering that both Pushcart and Best American Short Stories require previous publication in order for a story to make their cuts (and, again, considering that previous publication means passing the muster of privileged literary magazine editors), we fear that, as a long-term result, the short story genre now faces extinction. So we’re trying to resuscitate the genre with Coolest. (Only a few of Coolest 2022’s stories were previously published—the rest are gems that were completely overlooked by academia-oriented magazine editors.) Altogether then, you could say we’re trying to bring about a day when more than a few privileged readers will think, Hey, I truly want to read this book of short stories.

Authorlink: What would you like the reader to take away from the experience of reading the anthology?

Coffey: Love. We’d like them to love our inaugural volume’s thirteen stories, and, ideally, to feel the love these stories’ authors put into writing and revising them.

Wish: Which is maybe the same love that caused us both to be so captivated by each story in the first place. We’d like Coolest 2022’s readers to feel that same captivation while they read these thirteen stories and then say, “Wow. This book is something else.” 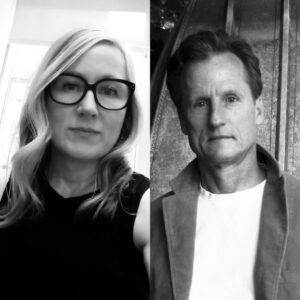 Under the name Mark Wisniewski, Mark Wish has authored more than 125 short stories that have appeared in Best American Short Stories, The Georgia Review, TriQuarterly, American Short Fiction, The Antioch Review, The Gettysburg Review, The Southern Review, Virginia Quarterly Review, New England Review, The Yale Review, and have won the Tobias Wolff Award, the Kay Cattarulla Award, an Isherwood Fellowship, and a Pushcart Prize. Mark was the Fiction Editor of New York Stories, where he published Percival Everett and John Updike and has been a Pushcart Contributing Editor for 20+ years. As a freelance editor, he’s revised the fiction of once-struggling writers so that it’s landed numerous major book deals and publications in The Atlantic, Tin House, The Kenyon Review, The Hudson Review, Best American Short Stories, and many more. His novel Watch Me Go was published by Putnam.

Elizabeth Coffey is an award-winning design director at Random House, where she has designed book interiors for Barack Obama’s A Promised Land, Michele Obama’s Becoming, Rachel Maddow’s Bag Man, and numerous other best-selling titles. She dabbled in poetry in the 90s and published in several small magazines. She is working on her first novel, a mystery about estranged sisters. Her pen name is a tribute to her great-grandmother. Elizabeth has been Mark’s go-to editor for virtually all of his published short stories and Watch Me Go.

The Night the Lights Went Out, an Enthralling Story