Interview: Story Grows Out of Nostalgia for Montauk 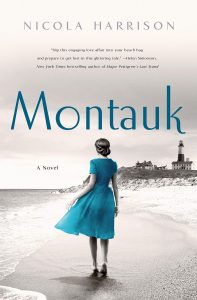 Enchanted with the history of Montauk, Long Island, Nicola Harrison decided to tell the story of a modest woman who finds herself among high society. With a husband whose interests lie elsewhere, Beatrice Bordeaux seeks to find a purpose and finds herself confronting past tragedy and future opportunities. Harrison discussed the creation of her historical novel:

AUTHORLINK: Tell me about your apprenticeship as a creative writer. Did you have a mentor at Stony Brook that offered advice that has stayed with you?

HARRISON: I studied English and creative writing in college and then went into fashion journalism but I was always writing creatively on the side. I’d take night classes whenever I could and eventually I thought, I might as well put all these classes toward something, so I ended up getting my MFA at Stony Brook. For me it was more about giving myself dedicated time to hone my craft, to study with writers like Matt Klam, Meg Wolitzer, Melissa Bank and Elizabeth Strout, and also to be around other likeminded people. I was writing memoir then but once I got all that out I switched to fiction.

AUTHORLINK: Where did the idea for Montauk come from? Did it present itself to you in the form of an image? A first line? A plot point?

HARRISON: It all started with the setting – Montauk. I’d spent a lot of time out there – I used to have a summer house in Montauk and over the ten years or so that I would go out there I began to see it changing, some of the mom and pop shops were closing up and new, cooler restaurants and bars were moving in. It was a gradual change but I felt it and when I started researching how Montauk came to be, I saw some similarities in how it evolved back in the 20s and 30s. So the story really grew out of my nostalgia for Montauk and how it used to be, and also the Montauk Manor, such a beautiful, commanding hotel on a hill overlooking all of Montauk, I just knew I wanted the story to be centered there.

AUTHORLINK: Talk to me about Bea and Elizabeth’s friendship and the role it plays in Bea’s pursuing a fulfilling life.

HARRISON: Elizabeth (and Thomas to a degree) bring Beatrice back to who she really is, back to her family, and where she’s from. I think we can all get a little lost sometimes, especially when we’re young, especially if you’ve been through a tragedy early on, we can tend to look for things that are radically different from what we know because that’s what we need at that time. Different is exciting, different allows you to leave what you know behind and start over. Beatrice found that in Harry but eventually she finds herself longing for the familiar, longing to come back to who she really is and who she really wants to be. That’s what she sees in Elizabeth, someone who’s values are reflected back to her, someone who’s real and hardworking and someone who cares deeply and fiercely for her family.

AUTHORLINK: What authors and novels influenced your writing of Montauk?

AUTHORLINK: Discuss the importance of place here. Montauk is more than a backdrop. How did you want it to function in the novel?

HARRISON: It’s funny – Montauk really did end up being more than a backdrop, but when writing it I never had any preconceived notions of the role that Montauk would play. People have said to me that it was like a character in the book, but that wasn’t intentional. All I can say is that its physical location, all the way out at the tip of Long Island, makes it a place of desperation and a place of beauty. It was marketed by its developer Carl Fisher as the place to be for wealthy New Yorkers to summer, “Miami in the Winter and Montauk in the Summer” but for Beatrice it was a place where she felt connected to the natural ruggedness and to the people who lived there. Its oceans, its wilderness, its hills, it all made her feel grounded and able to tap into who she really is and who she really wants to be.

AUTHORLINK: What were the greatest challenges when writing Montauk, and how did you overcome them?

HARRISON: The first challenge was settling into the time – 1938 – and deciding to make it historical. Originally, I started writing this as a present-day story, but I found myself writing everything in a flashback and then it became obvious that it should be set in the 30s. But I like writing historical fiction that a modern-day reader can relate to. Ultimately the same conflicts of love, betrayal, friendship and fitting in can happen in any decade.

And secondly, the sex scenes! Ha! I’d never written a sex scene before and I certainly didn’t want anything cheesy or trite. In the end, I tried to keep it as honest and vulnerable as possible. And to show a genuine connection between the characters.

AUTHORLINK: Talk about the process of revision for this book. What was it like working with your editor? How many revisions did you do and what was your main focus when making changes? Advice on revision for apprentice writers?

HARRISON: The revision process was not brutal at all – maybe because I’d been working on this novel for four years and I was in a weekly writing workshop with a group of trusted writers so I had received feedback on this book, section by section along the way. Also, I worked on edits with my agent before submitting to an editor. When I received my editor’s edits they were relatively minor and anything she did suggest seemed to make it stronger. I felt very lucky in that regard.

AUTHORLINK: How did you connect with your agent? What advice would you give on managing the author/agent relationship?

“…my advice is to trust your experts!…”

HARRISON: I found my agent by using Publisher’s Marketplace to look up the agents of authors I respected and books I’d enjoyed. I thought if I liked the book and the agent did too then there’s a chance she’ll like mine. I didn’t necessarily go after agents who represent similar books to mine – if they represent historical fiction already they don’t necessarily want five more historical fiction authors, they probably want a varied list of authors. In my case I had read and enjoyed Gone Girl by Gillian Flynn, I contacted her agent Stephanie Kip Rostan and that’s how we connected. As a debut author with lots of questions about publishing a book for the first time it’s been so wonderful to have her as a sounding board. She’s given me great advice along the way. My advice would be to read Courtney Maum’s new book Before and After the Book Deal and then ask your agent what you still don’t understand. Also, my advice is to trust your experts!

AUTHORLINK: What role has the Writers Room played in your career?

HARRISON: The Writer’s Room is a workspace in Manhattan dedicated to writers where I work every day. It’s a big loft space with a bunch of desks and it’s totally silent, all you hear is the click of people typing away on their keyboards. I am incredibly productive when I am there because it’s silent and there are no distractions, but also because I’m in the presence of other writers. In the kitchen, when making coffee, we might grumble about deadlines or the sound of sirens outside, but then it’s back to work.

HARRISON: In addition to being a member of the Writer’s Room, I am part of weekly writing workshop with about seven other writers. We meet every Thursday night, share some of our most recent pages and give each other feedback. This has been an incredible resource for me. Not only do I value their feedback having met with them for about six years now, but the weekly deadline holds me accountable. I would highly recommend seeking out a writing workshop or forming one. All you need is a few writers who are willing to share their work (we read ours out loud) and provide honest feedback.

In addition, I highly recommend becoming what I like to call a “good literary citizen.” Attend book readings and book launches. Buy the book, introduce yourself to the author, take a picture of the book and post it on Instagram, help get the word out. Everyone has so many other distractions vying for their attention that getting people to buy and read books can be hard. Support local independent book stores, introduce yourself to the owner. Spread the love.

AUTHORLINK: What you are working on now?

HARRISON: Currently I am working on a novel set in the 1920’s which takes place both in Manhattan and in the Adirondacks. The protagonist is an outgoing, brassy showgirl, very different from Beatrice in Montauk. I’ve been having a great time writing about the fashion, the speakeasies, prohibition and the 20’s in general – such a time of change for the country (and for women!). I just sent a final draft to my editor so I’m waiting on pins and needles to hear back.

Born in England, Nicola Harrison moved to California when she was 14. She studied Literature at UCLA and received an MFA in creative writing at Stony Brook University. She is a member of The Writers Room and has short stories published in The Southampton Review and Glimmer Train as well as articles in Los Angeles Magazine and Orange Coast Magazine. She was the fashion and style staff writer for Forbes and had a weekly column at Lucky Magazine. Nicola is also the founder of a personal styling business, Harrison Style. She has spent many summers in Montauk and currently lives in Greenwich Village, Manhattan. This is her first novel.

Young Nigerian Comes of Age amidst Political and Religious Turmoil

Me Before You by Jojo Moyes Delivers Emotional Punch –2013 Release

Author Applies Visual Skills to the Creation of Novel