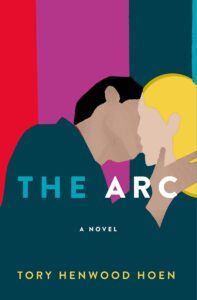 Ursula was 35 years old, and still single. When she was in a relationship, she felt as if she lost herself, which was followed by wanting out. Rafael was over 40. He had been badly hurt by a previous relationship and was wary of a repeat performance. Then came The Arc. As ridiculously expensive as the match-making service was, the promise of the perfect match seemed too good to pass up. From the moment that Ursula and Rafael met, after their match-up, it seemed the service lived up to its hype. Or did it?

“Someone should invent a more sophisticated dating app.”

AUTHORLINK: What was the first thought that you had that grew into this novel?

Hoen: “Someone should invent a more sophisticated dating app.” Initially it was a business idea, but having just left the startup world, I didn’t have the mental energy to think about starting a company. Turning the idea into a novel seemed more fun and more feasible.

Hoen: My own experience on dating apps helped me understand both the benefits and the limitations of using a third-party to find love. As I conceptualized The Arc, I wanted to explore: What if you pushed this process to an extreme? What if there was a service that could get to know you better than you know yourself, and then use that knowledge to help you both find your partner and grow as a person?

AUTHORLINK: How did you come up with the way The Arc would work and with Dr. Vidal’s philosophy on finding and keeping the perfect match?

Hoen: On normal dating apps, all the info you share is self-reported, so people can present a highly curated portrait of themselves. I wanted The Arc to equalize that in order to help its clients connect on a more authentic, honest level. The Arc analyzes its clients from multiple touchpoints (emotional, psychological, biological, etc.) in order to recognize not just peoples’ desires and strengths, but also their blind spots and shortcomings. It’s the specificity and thoroughness of the process that sets The Arc apart.

AUTHORLINK: Do you think something like The Arc could work?

Hoen: The Arc is very extreme, and I doubt it would be a viable business model in real life. But I think there’s certainly room for a more thoughtful dating app or service that allows people to connect in a way that’s more honest and less superficial. The very act of “swiping” is already starting to feelf passé, right? There has to be a better way!

AUTHORLINK: Ursula describes the man she hopes to find in detail to Dr. Vidal. How did you analyze Ursula to get those answers? I noticed the only physical attributes she described then were dark hair and warm, kind eyes.

“… it’s a good thing to know who you are and what you want in a partner.”

Hoen: Ursula is a very cerebral character, so I thought she would focus more on someone’s intellectual qualities than their physical qualities. But the importance of that scene is not so much her specific responses—it’s the fact that she had such specific responses. No wonder she hadn’t found her unicorn yet! And yet, I didn’t want her pickiness to be a strike against her—I think it’s a good thing to know who you are and what you want in a partner. I wanted Ursula’s pickiness to serve as a tool The Arc could use to find her most compatible match.

AUTHORLINK: In many romantic pairings, the characters don’t like each other at first and the story centers on how their feelings change. Did you have any misgivings about how to keep the story going when they were thrilled with each other at the start?

Hoen: I wanted to subvert that familiar formula and take the reader on an unexpected ride. I also happen to think that first impressions are really telling, so I love that Ursula and Rafael were taken with each other from the first moment. But just when everything seems solid, the rollercoaster begins.

AUTHORLINK: Something reviewers often do when describing a debut novel is compare it with more established writers. “Fans of Author “X” will fall in love with this.”  How do you feel about being compared to those other writers or their stories?

Hoen: It’s incredibly flattering to be compared to more established novelists whose work I enjoy so much (Sally Rooney! Taylor Jenkins Reid! Rebecca Serle!). But ultimately, I hope to cultivate a voice and a body of work that is totally distinct. I imagine most authors feel that way.

AUTHORLINK: How did finding an agent and selling your book go?

“…I was having the professional breakthrough I’d always dreamed about.”

Hoen: Surprisingly smoothly, given that it all happened within the first few months of the pandemic! I finished my first draft in February 2020 and was just about to start my agent hunt when the world went into lockdown. I worried that would throw the process off track, but I ended up connecting with my agent, Erin Malone, in April, and we sold the book in July. It was a surreal time. On one hand, the world was in turmoil; on the other hand, I was having the professional breakthrough I’d always dreamed about. It was hard to square those things, but it was certainly an unforgettable moment in my life. And thank goodness for Zoom. I actually didn’t meet my agent IRL until my book launch—which was almost two years after we started working together!

AUTHORLINK: Besides just enjoying the characters and their story, what do you think your readers can learn from your novel?

Hoen: I think my novel asks more questions than it answers—and that was intentional. I certainly don’t have the answers when it comes to finding love and maintaining a lasting relationship, but I wanted to explore the different ways that we think about compatibility in the modern world. Can you optimize love? Well, no. Can you be thoughtful and intentional about how you pursue it? Absolutely. Even though the world of The Arc is heightened and satirical, I still think it prompts readers to ask themselves questions about their own relationships and views on partnership.

Hoen: I’m writing my second novel! It’s not related to The Arc, but there are likely a few similar themes that will emerge around the idea of self-actualization and professional purpose. And I think there’s going to be a coyote, so get excited!

About the author: Tory Henwood Hoen graduated from Brown University. She has been an editor at New York Magazine and the creative director of brand at a women’s workwear start-up called M.M. LaFleur, She founded the company’s digital magazine, The M Dash.  Her work has appeared in publications such as Conde Nast Traveler, Bon Appetit, and Fortune. She currently lives in Brooklyn. The Arc is her debut novel.

The Unknowable Middle – Ausubel on Crafting a Novel