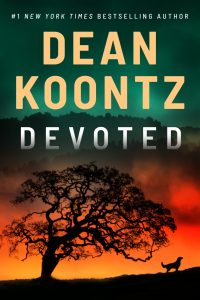 In his first book with Amazon Publishing’s Thomas & Mercer, DEVOTED, Dean Koontz, the internationally bestselling master of suspense, offers an epic thriller about a golden retriever, a boy named Woody, his mother Megan, and their extended family, as they confront a terrifying threat to all humanity.

As is expected from Koontz the story is scary, but it is also about human bonds, the extraordinary intelligence of dogs, and the struggle between good and evil.

In this Authorlink AUDIO interview with Dean Koontz, we take a deeper look into the characters he creates, and into his writing process as one of the world’s bestselling suspense writers. We also learn of Koontz’s desire to help audiences capture a sense of wonder and to show us a path through the darkness of the world.

The story’s villain is Lee Shacket, a desperate and vicious man. With a million dollars in cash in his car, he is fleeing Utah after blowing up a research facility owned by his company, Refine. Something went terribly wrong in those laboratories—and is going wrong, as well, within Shacket. He has murdered close associates and total strangers.

Megan Bookman is the widow of Jason, Lee’s best friend. She lives with her autistic but brilliant son, who hasn’t spoken a word in his eleven years. Lee covets Megan. He means to take her with him on his escape to Costa Rica. But not her boy.  He doesn’t believe she can resist him. He will not allow it. While conducting online research into his father’s “accidental” death, Woody has strayed into the Dark Web, where he’s made a target of himself. His father’s killers are now coming for him.

But Woody and Megan have an ally of which they are at first unaware. Kipp is a member of the Mysterium, a community of high-functioning dogs who wonder about their origins and communicate telepathically. When for the first time Kipp receives the thoughts of a human being, from the autistic boy, he knows Woody is in trouble. He will do anything to help.

This breathless story of suspense and terror is also about the many ways people become devoted to one another and to dogs—and dogs to them.

What are the two most important traits a writer needs to persevere in today’s marketplace?

In this interview, Dean shares thoughts, ideas, and insights into his finely-tuned craft. How is he able to write so fast, with 105 published novels? Where does he get his ideas? How does he keep up with multiple characters at once? What does he think it takes to become a successful writer today? What are the two most important traits a writer needs to persevere in today’s marketplace? Dean answers these and other questions in this 30-minute conversation with Authorlink.

ABOUT THE AUTHOR: Hailed as “America’s most popular suspense novelist” by Rolling Stone, Dean Koontz is an enduring, #1 bestselling author whose work spans six decades and garners unparalleled commercial and critical success. His books are available in 38 languages and have sold more than 500 million copies to date.

Koontz has also been praised as a “literary juggler” by The Times (of London) for his deft ability to blend other genres—horror, romance, humor, science fiction, and mystery—into his acclaimed suspense thrillers. Lauded by The New York Times as “psychologically complex, masterful, and satisfying,” Koontz’s work has been described by The New Orleans Times-Picayune as “scary, worthwhile reading,” “lyrical, without being naïve or romantic” in its portrayal of a “grotesque world, much like that of Flannery O’Connor or Walker Percy….”

His first novel was published two years after he graduated from college. Since then, moving fluidly between genres—suspense, horror, science-fiction, love stories—he has published many novels, novellas, and short fiction, and a memoir of his dog Trixie, A Big Little Life.

That prolific creative output dates back to Koontz’s youth. Koontz began writing at the age of 8, partly as a means of escaping the brutality of his family house and his parents’ volatile marriage. His childhood in central Pennsylvania was plagued by poverty, turbulence, and his father’s alcoholism and abuse. Koontz’s mother tried to be a protective parent to her son until her death when Koontz was 21—often coming between him and his violent father.

As a boy, Koontz used comics and television as inspiration: writing stories; illustrating covers, and constructing mini-books, selling them to family and friends for a nickel or a dime. At 11, he won a national essay contest on “What It Means To Be an American.” As a senior in college, he won a prize in the Atlantic Monthly’s national college writing contest. After winning, Koontz then sold the same story to a magazine for $50.

Despite his early beginnings, however, Koontz’s success was not immediate. Koontz married his high school sweetheart Gerda. After graduating from college, he took his first job counseling and tutoring underprivileged children in the Appalachian Poverty Program, while his wife worked at a shoe factory. In his spare time, he pursued his writing, first while at the poverty program and then at his next job teaching high school. After a year and a half of teaching, he had published three novels, and his wife offered to support him for five years to pursue writing full time. By the end of those five years, Gerda was managing the business end of Koontz’s growing writing career.

Koontz garnered his first bestseller with Demon Seed in 1977 when paperback sales of his 1973 novel got a boost from the film adaptation. Whispers, his breakthrough 1980 suspense novel, was his first on The New York Times bestseller list. Since then, fourteen Koontz novels have been #1 New York Times bestsellers in hardcover, making Koontz one of only a dozen writers to have hit that milestone. Sixteen of his books have risen to the #1 spot in paperback.

Seeing and Believing Explores the Longings of the Displaced Expatriate