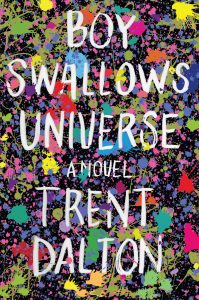 To say that 12-year-old Eli Bell lives an unusual life would be a gross understatement. His brother, Gus, communicates by writing words in the air, some of which seem prophetic –” Your end is a dead blue wren,” for instance. His father left after accidentally (or not) driving the boys into a lake. His mother joins up with Lyle, a good man who just happens to be a drug dealer with dangerous connections. His babysitter is a notorious jailbreaking convicted murderer known as The Houdini of Boggo Road. Eli just wants to grow up to be a good man and a crime reporter for the Brisbane newspaper. As his teen years unravel, even his family’s survival is at stake.

AUTHORLINK: What first gave you the idea to write this story?

DALTON: I think the seed of this story was really planted inside me as far back as the mid-1980s when I was just a boy and my three older brothers and I genuinely found a secret room built underneath the bedroom of the man my real life mum had fallen in love with. This man was the first man I ever loved and I love him to this day because he cared a great deal about my brothers and me and he cared a great deal for my mum at a time in her life when she needed a great deal of care. The reason that man had a secret room running from a secret access hole in the back of his built-in wardrobe was because he happened to be a dangerously successful heroin dealer across the outer western Brisbane suburbs and he needed a safe room to escape to should the police drop by unannounced. There was one thing inside that room, and it was a rotary dial red telephone. Finding that room as a kid was like finding a portal to another universe. That room was Narnia and my tiny mind was blown and I think I became a writer in that moment. That room and the thrill of its discovery never left me and it took me 30 years to summon the courage to write about it.

“The bits that aren’t real are the happy endings…”

AUTHORLINK: Besides that, and your acquaintance with Slim, what are some of the main aspects of the story that came from your own life?

DALTON: The love of Lyle is very real. The Lyle of the real world went away for 10 years in Brisbane’s notorious Boggo Road prison and I hoped for 10 years that he would show up one day at my doorstep. The drug dealing stuff is real, the loved ones going off to prison is real, the Housing Commission violence and addiction and desperation are very real. The bits that aren’t real are the bits where Eli Bell does the things I wasn’t brave enough to do as a kid. Those wild adventure bits are all wishful thinking. The bits that aren’t real are the happy endings and the revenge that is fulfilled. Real life, for better or worse, doesn’t work so neatly. Rea

AUTHORLINK: How much of the story did you plan before you started writing?

DALTON: I had a very solid and reliable story skeleton. Putting the flesh on that skeleton was joyous. But I knew where it was going to end and I knew the answers to the questions that Eli was so desperately needing to have answered. What does the blue wren mean? Who’s on the other end of the red telephone? And most importantly, will he get the girl?

AUTHORLINK: Did you have to go back and re-write earlier scenes as new ideas emerged later?

DALTON: I only had to re-write one major chapter and that was upon the wonderful advice of my editor, Catherine Milne. It was a scene that I had kind of chickened out on for reasons of self-preservation. It was a disturbing scene that comes from certain disturbing real-life places and I hadn’t fully stepped inside those places and I think Catherine could smell that in the way it was written. It was a tonal shift out of step with the rest of the book and it was good for the book and for me to go back and stare that down and write it up like a writer should write anything, with every ounce of his heart and soul. That’s how you get to true.

AUTHORLINK: How did you pull all the pieces together?

DALTON: It was mostly all kept in my head. Things came to me in that beautiful place between sleeping and waking and I’d scribble them down in a notebook which I always keep on my bedside table, I’ve got about 50 of those kinds of idea notebooks all filled with wild and inexplicable lines. But the structure of this book was like some thin glass spider web in my head that I would think about, all through breakfast, all through my day job as a journalist, all through dinner and then, between 8pm and 10pm most weeknights, I’d turn all that thinking into words on the white abyss of that computer screen.

AUTHORLINK: What did you have to research for the story?

DALTON: Huge amounts of research into the life Slim Halliday, the notorious “Houdini of Boggo Road,” the legendary Queensland prison escapologist who I knew as a family friend when he was in his 70s but the rest of Australia knew him as one of the few men who managed to bust out of the inescapable Boggo Rd Gaol, twice. I had very strange and wondrous flash memories of Slim from my youth, but I needed the hard research to fill in the blanks about him. And what emerged was the most extraordinary figure. A philosopher, a criminal, a bad man and a good man at once. The most well-read man in any clink and the most tender man at times who I know for a fact shared his hard-won wisdoms with people I love very much in their darkest hours. I just wanted to get the complexity of that guy on the page but there’s so much about that guy that I could easily, and happily, write a prequel to Boy Swallows Universe just on Slim.

“It just came and the second it came I knew it was the title. “

AUTHORLINK: Each of your chapter heads is written in three words – Boy does something – a la Brian Robertson, and so is your title. How did you come up with Boy Swallows Universe?

DALTON: No word of a lie, like much of this book, it hit like lightning. It just came and the second it came I knew it was the title. The same way the thread words of the book – Your end is a dead blue wren – came like lightning. Not there and then there. That gives you a buzz as a writer that stuff and I just went with the grand universe mystery of the gifts. Why did they land for me like that? Oh well, I better make the most of the gifts while I’ve got them. The title works on that journo level, as you say. Put your own story into a three-word headline. Pretend your life is so grand and big that you could do that. If Eli was to do that he would say, “Boy Swallows Universe”. That works in my life in the sense that one must swallow it all. The madness, the wonder, the tragedy, the love, the future, the past. Swallow it all down because all of that is you. Own it all. The bad stuff is the good stuff and the bad stuff won’t be your destruction, it will be the making of you.

AUTHORLINK: How do you describe what the book is about in more than three words (its essence, not the plot)?

DALTON: You must never sway from your own human decency. You are not permitted to let the hand you’ve been dealt be your excuse for being a knucklehead. Hope can flower in the thinnest of cracks. Love conquers all.

DALTON: An all my heart and all my soul love story adventure about gifts that fall from the sky, curses we dig from the earth and the secrets we bury inside ourselves.

About the author: Trent Dalton is an award-winning journalist for the Weekend Australia Magazine. He has written short and feature-length screenplays including Glen Owen Dodds, winner of the Australian Film Institute’s Best Screenplay in a Short Film Award and the Canal+International Award at the Clermont-Ferrand International Short Film Festival. Boy Swallows Universe is his first novel. He lives with his family in Brisbane. 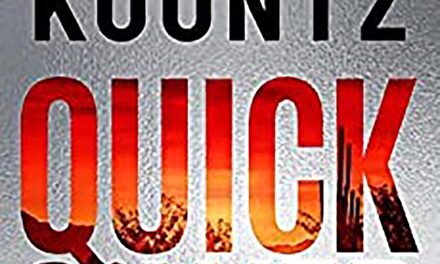 Interview: Looking Into the Thoughts of Dean Koontz