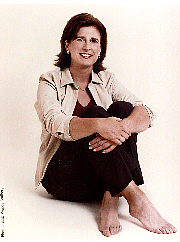 You want to be published? Novelist Laura Van Wormer can tell you how to do it, for three reasons.

First, shes written 10 books since 1988. The most recent, Trouble Becomes Her, the third in the Sally Harrington series, was released in early November by Mira.

Second, before she started writing she was an editor at Doubleday.

Finally, despite her tenure at Doubleday, she made some of the same mistakes in her writing career that the rest of us do.

Authorlink spoke recently with Van Wormer, who cheerfully and openly talked about her career and what shes learned along the way. This article recounts how she got started. Next time well look at some of her nuts-and-bolts advice for getting your work in print.

Van Wormer talks much like she writes, at least in the Harrington books. Todays Mr. Dreamboat is tomorrows Mr. Nightmare, she quipped when asked to describe The Last Lover, the second book in the Harrington saga. The books feature a small-city Connecticut journalist in the big, bad world of Manhattan media.

(A critic once referred to Van Wormer her as a Nancy Drew of the millennium, and didnt mean it as a compliment. She took it as praise anyway. If my readers ever feel the way I did when I picked up a new Nancy Drew, I would be thrilled, she said.)

Like her latest brainchild, Van Wormer lives in Connecticut, though I still keep one foot in Manhattan.

All of her books, she said, contain some element of truth  she lives in the same neighborhood as a Mafia don, for instance, and knows some lower-level mob guys. A stint on jury duty in a Manhattan murder trial led to a friendship with a financier at Goldman Sachs, who gave her a graduate-level education in dirty moneyand how much of it there is in our economy.

In college, she thought she wanted to write for TV, but took a secretarial job at Doubleday instead.

Her love of writing started much more innocently, however. When she was 3, her mother used to pull pictures out of Life magazine and urge little Laura to tell her a story about it. Later, she graduated to writing the story on wide-lined paper with one of those big primary-school pencils.

She realizes now, of course, that Mom probably was just trying to keep her quiet for a while, but the love of storytelling remains.

In college, she thought she wanted to write for TV, but took a secretarial job at Doubleday after graduation instead. She worked her way up to editor and spent some 7½ years with the publishing house. She didnt write anything of her own while she was there.

. . . a planned book about the Dynasty television series dropped in her lap . . . so she quit her job and got to work on her first novel. Then, in the fall of 1984, a planned book about the Dynasty television series dropped in her lap. She ended up having to go to Los Angeles and help write itand did so in three weeks. She later authored a similar book about the show Dallas.

The future editor and the future agent both hated it. Called it awful. Said she had no future as a novelist.

Van Wormer was devastated. But her lit prof friend had a slightly different view.

What common pitfall befell Van Wormer? And what did the professor say that put Van Wormer back on the write road? The answer next time (in the December 1 edition of Authorlink).

Lisa Tucker: “Play Your Heart. That’s What You’re Really After.”

Author Applies Visual Skills to the Creation of Novel