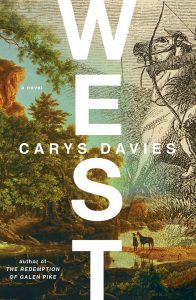 West, Carys Davies, Scribner – Widower Cy Bellman reads about huge bones found in Kentucky and becomes obsessed with the idea that the creatures may still live in the unexplored west. He leaves his young daughter, Bess, at home with her aunt and sets off to find them. Along the way, he is joined by a young Native American with an unusual name. At home, Bess has to help run the family mule farm and ward off unwelcome advances, all the while pining for her father’s return.

AUTHORLINK: What gave you the idea for this story?

. . . what snagged my imagination was an almost throw-away reference in the introduction to the journals; a reference to the mysterious, enormous bones . . .

DAVIES: Back in the 1990s I was living with my family in the US and, not long before we left to go home to the UK, my husband picked up an edition of the Lewis & Clark diaries in a second-hand bookstore on Long Island. For a long time – several years – the journals sat on a high shelf in my study back in the UK, until one day I got them down. And began to read. They were, in all sorts of ways, fascinating, chronicling, as they did, the great expedition undertaken between 1804 and 1806 at the behest of President Thomas Jefferson to explore the vast, unknown territories beyond the Mississippi River. But what snagged my imagination was an almost throw-away reference in the introduction to the journals; a reference to the mysterious, enormous bones that had been turning up, all through the previous century, in a Kentucky swamp, and to the fact that some people – including Jefferson himself – believed the giant monsters might still be alive somewhere in the uncharted expanses beyond the frontier.

It was one of those electrifying details that drops you straight into the head of someone from another time. To me, it felt no different from our present-day search for life on Mars or beyond; it had about it the same spirit of boundless curiosity and bold adventure, the same need to look beyond ourselves, to search for the meaning of life.

AUTHORLINK: What developed from this initial idea?

DAVIES: From this fascinating moment in history, West began to emerge. Being dropped into the United States around 1815 meant I was also plunged, necessarily, into a world that was being settled by Europeans; a world where the indigenous peoples were being driven out of their ancestral lands in the east, further and further west – driven, as would later become apparent, towards extinction.

. . . the mysterious bones and the expulsion of the Native American tribes – became bound up with each other as the driving forces in the novel.

Both ideas – the mysterious bones and the expulsion of the Native American tribes – became bound up with each other as the driving forces in the novel. West is the story of Cy Bellman, a widowed English settler and Pennsylvania mule farmer who makes up his mind to head off, beyond the frontier, in search of the giant animals, and of his young daughter, Bess, left behind in the east in the reluctant care of Cy’s sister, Julie. It’s also the story of Cy’s Native American guide, a displaced teenage Shawnee boy called Old Woman From A Distance.

AUTHORLINK: When you started writing the story, did you know how it would turn out and how it would get there?

DAVIES: Not at all. I never know where any of my stories are going when I begin them.

With West I experimented for a while, and over many thousands of words, with real historical characters, including Lewis and Clark, and Jefferson, but the more I wrote, the more I felt it was constraining somehow, keeping company with real life historical characters. I had the feeling there was a richer, more complicated, more moving story behind it all, if I could just find a way to tell it.

I know it can sound glib when writers say this – that one day a character strolled onto the page, but it’s true that it happens sometimes, and it happened here: one day Cy Bellman strolled onto the page. An ordinary, not particularly educated man, but hungry for knowledge and thrown off kilter by the loss of his wife and his religion, who reads one day in the newspaper about the bones, and the rumors that the creatures might be alive.

I remember writing the novel’s opening scene, where Cy says goodbye to his daughter Bess, and that was when the writing of the book really began, even though I didn’t yet know where the scene would lead. I knew in a general way that this was a story about extinction and loss and the search for knowledge. Other than that, I knew very little. I literally set off with Cy, wearing his hat and riding on his horse, into the unknown, to see where they would take me.

AUTHORLINK: Why did you foreshadow with one chapter that was out of chronological order while the rest mostly follows in sequence?

DAVIES: It has to do, above all, with the emotional heart of the story – with the complicated relationships between Cy, Bess and Old Woman From A Distance. The handling of time in the novel is very important in the way that emotion plays out, and the foreshadowing you mention is a key part of that.

. . . roughly half-way through the novel something occurs in the west that determines the whole of the course of the story.

West more or less alternates, in its successive chapters, between what’s happening to Cy in the west, and to Bess in the east, and roughly half-way through the novel something occurs in the west that determines the whole of the course of the story. It shines a light back onto the events that precede it chronologically but follow it on the page. It also shines a light on Bess’s experiences in the east, because the reader knows something she doesn’t yet know. This playing fast and loose with time sets up a pattern of echoes and ironies between the two strands of the narrative, and, I think, gives a depth to Bess’s fierce loyalty to her father’s idealism. It also turns the whole of the second half of the book into a sort of race against time, as Bess, waiting at home for her father to return, becomes more and more imperiled.

AUTHORLINK: What research did you do to authenticate your time and places?

DAVIES: Some details emerged from my reading early on of the Lewis & Clark journals, but I did most of my reading and research at the New York Public Library during the best part of a year while I was lucky enough to be a Fellow at the Cullman Center there.

The early nineteenth century setting of the story means that it takes place in an earlier, more remote time than the ‘Wild West’ of the second half of the nineteenth century with which we’re so familiar from movies and books and it was fascinating to delve into it.

A few recent academic histories were useful for their insights into the period in a general way, but the most valuable resources for me were the NYPL’s incredible collections of early nineteenth century books, maps, and manuscripts. Sifting through the archive I came across handwritten journals of European settlers, contemporary travelogues and military records, copies of treaties between the US government and Native American tribes, lists of trade goods, transcripts of speeches, letters, minutes of paleontology and philosophical societies’ meetings, botanical studies, drawings, land deeds, and so on.

It’s like panning for gold, and the best things are those you’d never dreamed of finding.

I was rarely looking for anything particular. There are always technical points and facts, of course, you must check when you’re writing historical fiction, but ultimately, in my experience, you end up throwing almost all your research away. It’s like panning for gold, and the best things are those you’d never dreamed of finding.

AUTHORLINK: Because of the nature of your characters, there is little opportunity for dialogue in your story. Was there any resistance to the amount of narrative and time in the characters’ thoughts?

DAVIES: West, in many ways, is about how little we know of other people. Like my short stories, the novel contradicts what the poet John Donne said, that ‘no man is an island’. We are all islands; it’s part of the mystery of being human: that we can never be sure what another person is thinking or feeling or hiding. The characters in West are all, in some way, mysteries to each other; their thoughts and point of view often taking the place of speech because that is the nature of the relationships they have with each other. Cy and Old Woman From A Distance, for example, do not share a common language and are separated by degrees of suspicion and ignorance. Bess, meanwhile, retreats into solitude as a way of protecting herself from the actions and opinions of others.

So, no – there was no resistance; the sparseness of the dialogue is in itself part of the story.

AUTHORLINK: What did you write before this novel (published and unpublished) that helped you get the skills to write and sell a successful novel?

My style is quite spare – in a short story you learn to do things with fewer strokes . . .

DAVIES: I’ve been writing short stories for the last twenty years and have published two collections, Some New Ambush (2007) and The Redemption of Galen Pike (2014) and couldn’t have written West without having done that. Even though West is an epic story that unfolds over a couple of years and thousands of miles, it’s quite a tensely concentrated one, and I think that owes a lot to my experience of writing short fiction. There is, I suppose, a certain way in which I like to tell a story. My style is quite spare – in a short story you learn to do things with fewer strokes; every word, every line, every paragraph has to earn it’s keep, otherwise it has to go. There can be no longueurs. Also, in a short story, there tends to be a lot that’s left unsaid, so that a lot of the emotional power comes – as I think it does in West – from between the lines.

About the Author: Carys Davies has received the Frank O’Connor International Short Story Award, the Royal Society of Literature’s V.S. Pritchett Prize, and many others for her short stories. Since West, she has finished a new short story and has been working on a second novel. She was born in Wales and lives in England. 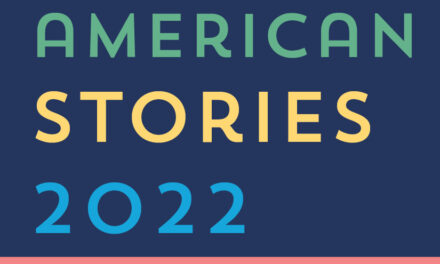