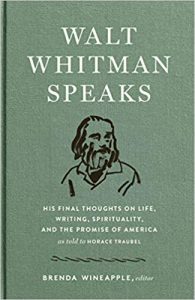 The Library of America marked Walt Whitman’s bicentennial by releasing a condensed version of his final thoughts on “life, writing, spirituality and the promise of America” in a pocketbook entitled, “Walt Whitman Speaks.”  When he was a septuagenarian in ill health, Whitman moved to New Jersey, where he encountered Horace Traubel, bank clerk and journalist, who almost daily visited and transcribed their conversations into texts that ultimately totaled nine published volumes.

Editor Brenda Wineapple, who waded through the writings, says in her introduction the “bulky volumes” were “cumbersome, and taxing,” and as a result the material “is not well-known or accessible.” Wineapple, an award-winning author and editor, selected Whitman’s most profound and insightful wit and wisdom in a book meant to carry about during nature trips or as a quick reference.

Recognized as America’s most famous poet, Whitman was not one to mince words, especially in his poetic voice. His notable self-published book of poems, “Leaves of Grass,” was released in 1855 with twelve poems, but the final edition ballooned to 300 poems. His work was often condemned because of alleged sexual overtones, his critical judgement of other writers, and his politics, as well as targeting his free poetic verse style.

This book categorizes his musings, for example, under Politics he tells Traubel, “Washington is corrupt—has its own peculiar mixture of good—but the evil is mostly with the upper crust—the people who have reputations—who are better than other people.” In the Friends section,  Whitman claims, “I am the friend of all.” On Women, he laments, “I look to see woman take her place in literature, in art—show what are her innate potencies, powers, attributes.” “Leaves of Grass,” he says, was an evolution, in its most varied, freest, largest sense.

Wineapple notes essential details of Whitman’s personal life and his relationship with Traubel whom he entrusted all of his work. Whitman says at one point, “I seem to be developing into a garrulous old man-a-talker—teller of stories.”  When Whitman died In 1892, Traubel had accumulated over a four-year period some 5,000 pages of conversation. Whitman apparently didn’t examine Traubel’s notes, but according to Wineapple, he trusted Traubel, telling him, “I want you to speak for me when I am dead.”

Although this is not a book about poetry, it does it include Whitman’s poetic wisdom. It’s a gem of a publication not only for Whitman scholars, but also those unfamiliar with his work because his observations seem uncannily relevant now as they were when he conversed with Traubel.

Art in the Blood by Bonnie MacBird