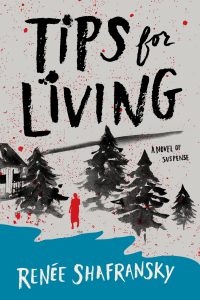 Nora Glasser feels her post-divorce life is coming together. She lives in a small town on Long Island and writes a snarky column for the local paper called Tips for Living. Things are going well until Helene, the woman her ex, the famous painter Hugh Walker, cheated with shows up in Nora’s Pilates class, the woman who had the baby Nora always wanted but wasn’t able to give Hugh. Then the unspeakable happens–Helene and Hugh are found dead in their new posh mansion. The portrait of the then pregnant Helene and Hugh spooning together is slashed in an angry manner and their corpses posed in bed in a similar fashion. Nora becomes the prime suspect and starts sleuthing.

Nora houses self-doubts–could she be the killer? Her childhood sleepwalking problem seems to have started up again under stress, and she worries that she could have murdered the couple in her sleep. But there are others with motives stronger than jealousy and hurt. Hugh Walker’s art is worth more than ever now that he’s dead, and his young daughter is sole heir to the fortune. Could his born-again brother Tobias covet the money for his ailing ministry? Could the husband of her Pilates instructor have killed the pair because of his brief affair with Helene? And what will become of Hugh’s friend and art agent, gallery owner Abbas, now that his protégé is dead? Nora has faithful companions on her side and finds love where she least expects it, but will she ever be able to prove her innocence?

Well-rounded characters, a well-realized setting, and a sympathetic heroine worth cheering for makes Tips For Living a fun murder mystery romp that fans of the genre will most certainly enjoy.

No Sanctuary by Richard Laymon