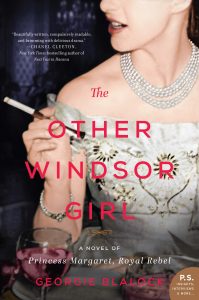 Georgie Blalock’s novel, The Other Windsor Girl, is a fictional non-literary romance novel based on British royalty research. She focuses on Princess Margaret, daughter of King George VI and Queen Elizabeth, second in line to the throne after sister Queen Elizabeth II.

Her novel begins in1949, when Honorable Vera Strathmore’s fiancé died, in the wake of World War II. Her family lost most of their fortune but yet remain aristocrats. Strathmore complains her father could do more, but it was beyond him to work. She earns some revenue from salacious romance novels she writes under a pen name. Princess Margaret meanwhile is a fan of Strathmore’s books and enthralled with the sexual behavior of the main character.

Margaret invites Strathmore to join her “set,” a group of friends who party together and feed her desire for attention. But as Margaret’s friends move on, the Queen asks Strathmore to become the Princess’ second “lady-in-waiting,” a trusted companion.

Princess Margaret, it turns out, drinks heavily, is in love with a commoner and throws tantrums. Her theatrics generate negative media attention but Strathmore heads off scandals. In the novel, Strathmore falls in love with an American doctor but opts for “royal” life with its glory and mischief rather than marriage. Her lover suggests her real job is merely to ensure a “pampered Princess never has to feel a moment of discomfort.”

In true life, Margaret actually led a scandalous life, first falling in love with Peter Townsend, a captain sixteen years her senior. The Church of England opposed the marriage because Townsend was divorced. Later, when Townsend remarried, Margaret in distress marries photographer Anthony Armstrong-Jones, who she ultimately divorced after numerous affairs.

It is a yawner of a read. Alas, more ink is spilled describing Margaret’s fashion and social gatherings rather than offering literary substance or insight on Great Britain’s unique, and admittedly, sometimes seedy, relationship between government and royalty.

Lights, Cubicle, Action! by A. A. Cantor

On Strike for Christmas by Sheila Roberts