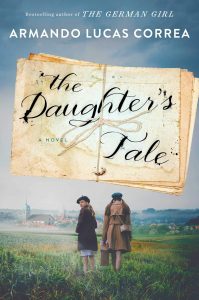 Armando Lucas Correa’s powerful and sorrowful novel, “The Daughter’s Tale,” returns us to the rise of Nazism in Germany, told through the eyes of young Jewish girl. It’s based on a true account of a woman who was 14 years old when her parents were dispatched to a death camp.

Correa’s narrative evolves around historical events: Refugees on the St. Lewis ocean liner, turned away by Cuba, the USA and Canada, and ultimately killed in Nazi concentration camps, and the 1944 massacre of more than 600 people (women and children were burned) in the French village of Oradour-sur-Glane in just before the war ended.

The fictional story begins with a Jewish family living in Germany.  First, Amanda’s bookstore is raided and her books burned in the street and her husband, Julius, a cardiologist, is arrested and sent to die in a camp. Amanda challenged with saving the lives of their daughters, sends the oldest Viera on a cruise ship bound for Cuba while she and 4-year-old Lina, find shelter at a friend’s farm in France owned by Claire Duval, and her daughter Danielle. But safety is short lived. When France falls to Germany, Amanda and Lina are identified as Jewish and arrested.   Amanda ultimately sacrifices her own life to engineer the escape for Lina back to the Duvals under a new name, Elise Duval.

Lina’s tragic journey meanwhile only worsens when Germans soldiers attack the village and massacre hundreds, and she wonders how many more deaths she will experience. Ultimately, Lina’s actions in order to survive haunt her until her own elderly death in the United States when she is forced to revisit her past.

This “must read’ novel is spellbinding. . .

Correas’s tale reminds readers of circumstances that drove the mass slaughter of Jewish people and other minorities, all part of World War II’s nightmarish past. At the beginning of the story, Amanda hears, “Germany for Germans.” It was time to leave, but to where? “They had infected the whole city, the whole country, and now they aimed to contaminate the entire continent, perhaps even the world. Their goal had no bounds: The universe itself was to be perfectly Aryan.”

This “must read’ novel is spellbinding, bolstered by Correa’s extensive research, visits to war sites in France and Germany and survivor interviews. It reveals a past many prefer forgetting — true, horrific stories that emerge from hate that we should really be retelling, repeatedly, so we continue to remember.

The Good Works of Ayela Linde by Charlotte Forbes

Every Last One by Anna Quindlen