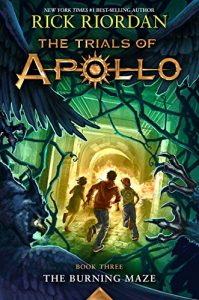 In the third book of The Trials of Apollo series, once again we find the god Apollo incarnated in the weak and flabby body of a pimply-faced human teenager named Lester. He’s stuck on Earth with orders from Zeus to find the missing Oracles and destroy three capricious, not-quite-dead Roman emperors, and he’s very lucky to have brave and true friends to save his skin time after time. In The Burning Maze, we find the hapless Apollo and his feisty sidekick Meg McCaffrey (daughter of Demeter) on a mission to liberate an Oracle and free the sun titan Helios from his captors, which include his evil granddaughter Medea , a talking horse named Incitatus, and probably the worst Roman emperor ever, Caligula.

The maze-like prison burns beneath the cities and hills of Southern California, causing drought, wildfires and intense dry winds. (And you thought it was just climate change, right?) Apollo receives a vision of the Oracle Herophile in chains beside a lava lake and knows this is his latest quest. Of course, he’d rather play in safe and strum his ukulele and recite poetry, but as he spends time as a human and with humanity, he’s learning what it means to sacrifice one’s self for the love of others. His friends Grover Underwood the Satyr, a myriad of Dryads, the demigods Piper McLean and Jason Grace, and an unlikely creature called Crest the Pandos all fight heroically at his side to liberate the Oracle, some paying the ultimate price. Apollo vows to remember what it means to be human and to fight another day.

The Burning Maze is a fast-paced, action-packed, comedic-adventure full of unusual characters and thrilling situations guaranteed to delight young adult lovers of fantasy and Greco-Roman mythology.

Scream For Me by Karen Rose

The Night Buffalo by Guillermo Arriaga