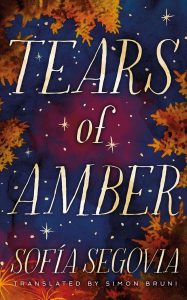 You may have vowed not to read yet another war novel on human suffering, but Mexican author Sofia Segovia’s new book will change your mind. Segovia’s compelling “Tears of Amber,” focuses on females — mothers, left alone with their children to navigate war horrors.

Although a fictional story, it’s based on actual events related to the author by two survivors of the bombing and occupation of Prussia during World War II. Ilse Hahlbrock and Arno Schipper, who met after the war, ultimately married and moved to Mexico where they met Segovia.

Ilse’s family farmed in a remote corner of East Prussia, left alone because they provided food for German troops — until the Russians advanced. When Germany was retreating from the area, Ilse’s father left his family behind and joined the German Army. Her mother with five children fled to Prussian capital, Königsberg but along the road they were shelled by Russian bombers.  En route they passed refugees who fled the city crushed to death by retreating German tanks. Ilse questioned why “wasn’t this army fighting for them?”

They fled into the forest. Like other desperate refugees searching for food and shelter, Ilse’s mother fed her family whatever she could find, including a cat.

When Arno’s father was drafted, his mother with left to tend four children. She found passage out of Prussia for three of the children, but her and Arno stayed behind, scavenging for food in the remains of a demolished Königsberg mansion. Arno chopped down wooden doors from abandoned buildings for firewood while his mother raised rabbits.

Another important character in this dramatic story is Janusz, a Polish prisoner of war forced to worked on the farm alongside the Hahlbrock family. Ilse viewed him as a friend who told fairytales about an amber tear and a Baltic queen. When he could have left as a free man he chose to aid Ilse’s family in their exodus. He reminded himself of what his mother told him: “Son, sometimes you have to half-die so you can live.”

Segovia’s vivid descriptions of how refugees do whatever necessary to survive compels readers to be sympathetic with human struggles, rather than simply taking sides in a conflict. This story demonstrates the staggering toll war takes, especially on women, left to carry on.

Beneath the Sands of Egypt by Donald P. Ryan

THE MUSEUM OF HORRORS edited by Dennis Eichison