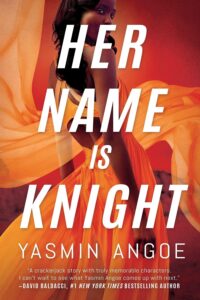 Her Name is Knight

Yasmin Angoe’s thriller, “Her Name is Knight,” begins with a cautionary note from the author: The vivid sexual violence depicted could be a trigger for victims of human trafficking and abuse.

Nena, the protagonist, at age thirteen witnesses the tortured death of her family and destruction of her home, N’nkakuwe, a Ghanian village where her father was chief. Some men had sought to use the village as a corridor for illegal trafficking but Nena’s father resisted. Nena is subsequently kidnapped, and herself tortured in a compound until she is sold to a sadistic pedophile in France. But she manages to escape, and, while living on the streets, she comes to the aid of a woman who is being assaulted and robbed.

The woman, Delphine Knight, and her husband, Noble, adopt Nena in gratitude for saving Delphine’s life. In Nena’s new life, she becomes an assassin helping the Knights with their enterprise, the African Tribal Council, an organization aiming to build a united Africa much like the European Union. Nena channels her anger by taking out the bad guys who jeopardize the council’s vision: “All of Africa united into a large multinational business entity … leaders instead of workhorses.”

… the essence of the novel is stirring and suspenseful …

Nena’s role reflects determination to right the wrongs against victims of human trafficking and “how people go about reclaiming power that was stolen from them,” Angoe says. It’s a complicated scenario she’s constructed for her first crime novel. The story shifts from the past with historical information on Ghana, where the author spent time with her grandmother, and then is grounded in traditional stories, down to the present in the United States.

Though many of the scenes are implausible, the essence of the novel is stirring and suspenseful, and it reflects ongoing atrocities against and within some African countries.

North of Here by Laurel Saville

The Other Half of Life by Kim Ablon Whitney