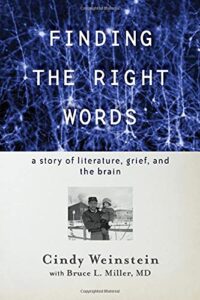 When my local pharmacy offered a brain health test, I cringed, afraid the results could land me amongst six million Americans living with Alzheimer’s disease, according to a 2021study by the Alzheimer’s Association. Yet, I am also aware that avoidance won’t make dementia evaporate, which is underscored in “Finding the Right Words,” a book co-authored by English professor Cindy Weinstein and neurologist Dr. Bruce L. Miller, a juxtaposition of literary narration and medical analysis on the early onset of Alzheimer’s.

Weinstein, an English professor, was in graduate school when her father Jerry, fifty-eight years old, was diagnosed with Alzheimer’s and died twelve years later. She writes that she regrets “honoring my mother’s wishes” by not telling her father about his Alzheimer’s diagnosis. Perhaps then he would have faced it and maybe even had a backup plan, she laments.

As Weinstein recalls when her father’s brain declined, she notes an irony: Here she was, absorbing a wide range of books as a voracious reader in graduate school, while her dad’s mind “was like a chalkboard filled with equations and words-memories-and Alzheimer’s came along and took an eraser to each number and word…”

… useful information to help fend off this dreaded disease.

He was young and healthy, jogging every day, before he “ended up in his first nursing home and before he became big pharma’s dream come true.” He metamorphosed into someone else, she writes.

Miller, in his medical interpretation of what Weinstein witnessed as her father declined and suffered, relates advancements made in treatment in the past two decades since her father was straitjacketed and keep sedated. He explains while Alzheimer’s is most common for people over sixty-five, early onset is uncommon.

Miller, founder of the Memory and Aging Center in California, also notes that people who read less are more likely to be diagnosed with Alzheimer’s, based on research of those with a high illiteracy rate.

Writing the book was a healing mechanism for Weinstein, she says, to come to terms with her guilt, a feeling of many who have lost family members to Alzheimer’s. This unlikely author team has Miller explain brain function in lay terms, while Weinstein shares her love of literature — a unique partnership of science and art. But despite its grim subject it’s not a downer, rather offering useful information to help fend off this dreaded disease.

The Trapped Girl by Robert Dugoni

The Alchemyst by Michael Scott