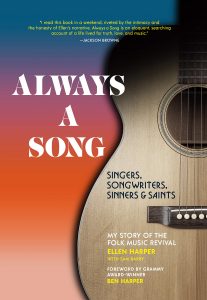 Folk Singer Ellen Harper’s stirring memoir, “Always a Song,” begins with her birth, part of a musical family enjoying “fascist-free” post-World War II life in New Hampshire. But her family’s left-leaning politics ran headlong into the age of McCarthyism, prompting them to uproot and move to Claremont, California, where they opened the legendary Folk Music Center.

Harper, in her preteen years, recalls the feeling of isolation when her father was blacklisted for refusing to give names of communists. He was subsequently fired from his professor position.

Musicians and artists who were Harper’s mother’s students followed them to California, so again their home was filled with music. “Guitars, banjos and singing” were the “glue to our life,” she writes. But because their house began overflowing with musical instruments and records, her parents decided to open The Folk Music Center in Southern California. Its notoriety attracted singers like Jim Seeger and Joan Baez among its regulars.

When Harper herself became a performing artist, she met Jimi Hendrix, Paul McCartney, and Bob Dylan. She also relates how music reflects America’s political changes, noting the assassinations of President John F. Kennedy, Robert Kennedy, Martin Luther King and Malcom X and the Vietnam War as examples. But Harper avoids tagging a specific description to folk music; rather, she says, it is simply music — what you sing.

In her memoir she also writes about her failed bi-racial marriage, raising three sons alone, and her departure from music to become an educator. Her PhD thesis analyzed the impact of McCarthyism on public schools.

Harper’s memoir is a definite good read, not because of her name-dropping, but in her descriptions of how historical events in the United States influenced the music world. Harper meanwhile continues to pursue peace and equality causes, while also touring with her son, Ben Harper, a three-time Grammy award winner. 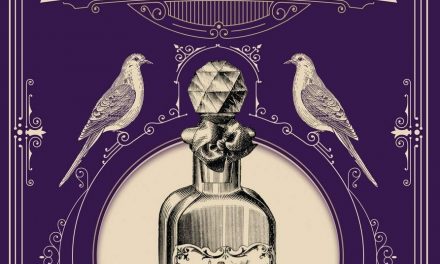 The Forbidden by F. R. Tallis