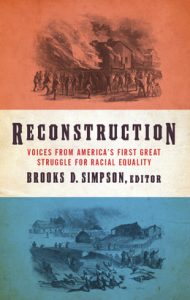 The Library of America’s new release, “Reconstruction,” richly details promise and betrayal during the turbulent post-Civil War era in the United States and invokes a deep sense of melancholia. A century-plus later, despite constitutional amendments meant to insure all “people of the republic” be treated equally under the law, the U.S still struggles with racial equality and denies equal rights to women.

“Most Americans don’t know very much about Reconstruction, and in many cases what they may think they know is wrong,” writes editor Brooks D. Simpson. Admittedly, this collection is an eye-opener, as we witness Andrew Johnson, who succeeded assassinated Abraham Lincoln, choose to narrow opportunities for Reconstruction, and was ultimately impeached.  There is no question the Reconstruction outcome would have been gravely different had Lincoln lived and his racial equality plan succeeded.

Simpson’s compilation includes letters, speeches, statements from famous and not-so-well-known persons who were directly involved in the debate over the passage of the 14th and 15th amendments. The voices reveal the violence and the political change in the Republic during the twelve-year Reconstruction, including victims of the rising Ku Klux Klan and subsequent white supremacy in former Confederate states.

Though “freedman” and African Americans were ultimately allowed to vote, unreasonable barriers and qualifications were imposed to stymie their participation in elections, even today. As Frederick Douglass writes to Johnson, when the law defines when and where a “freedman” can work and live, it is another form of “absolute slavery.”

Most chilling is the portrayal of the KKK activity and military action to control them. Frances Ellen Watkins Harper, for example, suggests a “colored man” was suitable to be a soldier, but “not good enough” to be treated equally.  Also intriguing is how political labels and platforms flipped in the two political parties that still dominate today. The 1880s Republicans were much like today’s Democrats, and the “Radical Republicans,” who supported civil rights, echo the Democrats’ current party platform. Equally significant is how one electoral vote led to the presidency of Rutherford B. Hayes, prompting states to impose their own segregation rules against African Americans.

Most Americans aren’t prone to reading history, but this volume on a period that still lingers today vividly illustrates how our past forms our present.

Harry Potter and the Order of the Phoenix by J. K. Rowling

Off the Menu by Christine San

The Complete Fables of La Fontaine