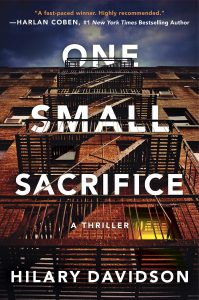 Celebrity war photojournalist Alex Traynor blames himself for many things, not least of which are the deaths of two women. One was a casualty of the war in Syria. The other was his friend Cori Stanton who killed herself in a drugged-up fall from Alex’s apartment block on Thanksgiving Day evening. NYPD Detective Sheryn Sterling thinks Alex killed Cori and got away with it, which is why she takes an immediate interest in the disappearance of Alex’s fiancee, Dr. Emily Teare.

Emily’s disappearance is totally out of character, and Alex can’t—or won’t—account for his recent actions. Sheryn allows for Alex’s PTSD, knowing from personal experience how it affects sufferers and their loved ones, but if he’s guilty of kidnap and murder then justice must be served. Alex strives to establish his innocence and as Sheryn and her new partner investigate she realizes the case isn’t as straightforward as she first thought. Emily was hiding a secret. So is the building super where Alex lives. And how is Alex’s former best friend, disgraced Wall Street broker Will Sipher, involved? As the clock ticks on and finding Emily becomes more urgent, everything hinges on what exactly happened on the roof of Alex’s apartment block last Thanksgiving.

…leaves the reader guessing until the very end.

One Small Sacrifice is a complex and engaging psychological thriller with fully-realized characters. The plot throws light on the darker areas of human nature, of the fallibility of memory, and leaves the reader guessing until the very end.