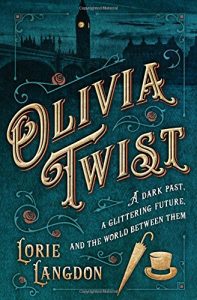 Lorie Langdon’s new young adult book, “Olivia Twist,” remakes Charles Dickens’ classic “Oliver Twist” and serves up a pleasurable read with countless thrills. In her version, Olivia is born in a workhouse where a surgeon recommends she be raised as a boy so she could have a “fighting chance” to survive the crime-ridden streets of 19th-century London.

When Olivia, now known as “Ollie,” escapes the horrors of the workhouse, she is found by Artful Dodger, the leader of a gang of ragamuffins, who teaches her the art of thievery. An unfortunate caper goes awry, and Ollie is arrested but rescued by a wealthy uncle who had been searching for her. Ollie then becomes a high society lady named Olivia.   Dodger meanwhile is “artfully” adopted by a “society matron” who has lost her fortune and sees his larceny skills as a way to maintain her lifestyle. But in order for Dodger to enter fine homes of London, she works to turn him into a gentleman named Jack MacCarron.

The drama begins about 10 years after Ollie had been arrested and Dodger had gone on his own path when they accidentally meet at a soiree, inside their hostess’ bed chambers, both in the process of looting. Jack doesn’t recognize Olivia, even as she blurts out Dodger’s name. Each flee with small treasures in their pockets, both with missions accomplished, and both curious why each other appears to be wealthy but yet commit larceny.

It is a love story, laced with family loyalty, and Olivia’s inability to forget her haunting past. She is determined to return to the streets to help the homeless, even if danger awaits her. Dodger subsequently learns of her secret night escapades and decides to rescue her as a new street turf war ignites.

Langdon, like Dickens, provides a comprehensive view of the plight of the poor, many whom were refugees. She weaves a hair-raising adventure in historic London with a burgeoning population, where increasingly wealthy Britons live alongside throngs of people in the slums and when children caught stealing were put to death.

Girl to the Core by Stacey Goldblatt

The World of Raymond Chandler Edited by Barry Day

The Story of Tibet by Thomas Laird