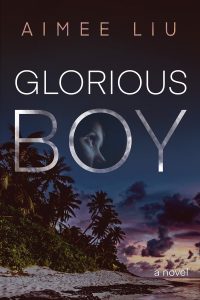 In the late 1930s Claire and Shep Durant move to the Andaman Islands, a far-flung outpost of the British Empire in the Indian Ocean. Based in the island capital of Port Blair, Shep serves as Civil Surgeon while anthropologist Claire studies the native tribes whose way of life is threatened by encroaching civilization. A penal colony for almost a hundred years, the Andaman Islands are a melting pot of Asian nationalities. Racial tensions run deep and fierce, the passions barely kept in check by the authorities through occasional bursts of shocking violence.

When war breaks out in Europe its shadow falls over the charmed colonial life of the white folk. Claire struggles with her young son Ty, her “Glorious Boy” who acts mute, his issues alleviated only by the Durant’s native servant girl, Naila. An earthquake followed by the Japanese declaration of war shakes the island colony to its foundations, and with the Japanese closing in, Claire is evacuated to mainland India. At the last minute Ty and Naila go missing and Shep remains to search for them. When the Japanese invade nothing more is heard. Claire must return to the islands and use her hard-won knowledge of the Andaman tribes to help the Allied cause. Her overriding hope is to rescue Shep, Ty and Naila. With horrifying brutality and betrayal on all sides, will Claire ever see her family again?

In Glorious Boy, Liu’s superb writing brings alive the strange days at the end of empire, from the torpid heat of the Andamanese jungles, to the bustle of metropolitan Calcutta. She carries the reader in an epic drama of a family caught up in events beyond their control all the way through to the nail-biting ending.

Mr. Hands by Gary A. Braunbeck