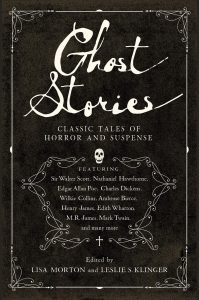 Classic Tales of Horror and Suspense

It was in the 18th century, after the Civll War and World War I, when a growing interest in communicating with the war dead spawned a new religion: “Spiritualism.” That in turn prompted emergence of ghost stories. Editors Lisa Morton & Leslie S. Klinger in their new anthology, “Ghost Stories, Classic Tales of Horror and Suspense,” offer a historical context to this phenomenon, along with evocative reads by well-known writers.

The tale by Author M.R. James, credited with refining the ghost story, included in this collection is: “Oh, Whistle and I’ll come to you, My lad,” about a professor and non-believer who finds a whistle in the remains of a Catholic military order active in 1119. His life is altered forever when he blows it and awakens the unexpected.

Pulitzer-winner Edith Wharton’s piece with feminist overtones, “The Lady’ Maid’s Bell,” features a wealthy and gentle woman who becomes gravely ill during rare visits from her husband. The maid is assisted n protecting her mistress from strange sources.“The Philosophy of Relative Existence, by Frank Stockton, is about a poet and a philosopher visiting a seemingly perfect “small hamlet,” occupied by “queer things that are not flesh and blood” from the future.

Other stories include the supernatural “Substitute, by Georgia Wood Pangborn, about a mother who gave away her children because she couldn’t afford to care for their medical needs. Elizabeth Stuart Phelps’ “Since I Died,” focuses on the voice of the dying person speaking to her partner consumed in agony.

No horror anthology would be complete without Edgar Allan Poe. His story, Ligeia, eloquently describes his adoration for his true love, but is she real? “I become a bounded slave in the  trammels of opium, and my labors and my orders had taken a coloring from dreams.” he writes, as he weds another woman after Ligeia’s death.

Other classical authors included are Henry James, Nathaniel Hawthorne, Charles Dickens and Mark Twain, who scoffed at the supernatural. His “The Ghost Story” is a comical reaction to the Cardiff Giant, a “fake” petrified man sought by P.T. Barnum, from where the aphorism, “There’s a sucker born every minute” arose.

For its varied collection of quality writing, this is a gem, offering insight into human reaction to catastrophic events when death is difficult to accept. The stories also help understand the period between science-oriented Enlightenment, and Spiritualism.

Heart of the Matter by Emily Giffin