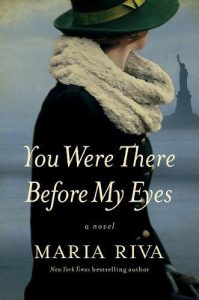 Pegasus Books
ISBN:978-1-68177-507-4
Maria Riva’s illuminating historical novel, “You Were There Before My Eyes,” is marketed as an adventure and love story of two Italian immigrants. But the novel’s real focus is a factual account of automobile manufacturer Henry Ford’s ruthless control over his employees, his racism, and his promotion of prohibition, that drives this compelling narrative.
Giovanna and her husband Giovanni, change their names to “Jane” and “John”, to assimilate. John, a loyal employee at Ford’s Detroit factory, cooperates with Ford’s secret morality police, the “Sociological Department,” who routinely and randomly inspected employees’ home to ensure they met Ford’s “moral and social standards,” including cleanliness, frugalness, and alcohol-free.
Ford also expected his employees to abandon their culture and became “true” Americans. Riva draws a scene in which immigrants, during citizenship ceremonies, are forced to appear in traditional costumes, then “walk down a makeshift gangplank of a cardboard ship” into a caldron representing a melting pot and reappear, transformed, sporting a “proper”   American suit.
This dramatic tale, bookended by world wars, evolves around Jane and John, and friendships they developed among a handful of European immigrants with whom they shared living quarters in a boarding house owned by a German couple. Ford later forbid employees living as multiple residents in the same house, fearing sexual “misconduct.”

. . . invokes contemplation on the limited inroads the United States has made in globalization.

Riva captures her character’s fears, their longing to become an American and personal tragedies, as they witness dreams collapse with the advent of World War II. Ford meanwhile fueled wartime animosity by publishing articles in his company newspaper attacking and blaming Jewish people for the conflict, his rhetoric subsequently said to have been adapted by Adolph Hitler.
History now seemingly repeats itself as events unfold in this historical novel that uncannily mirror our current times. Riva, actresses Marlene Dietrich’s now-92-year-old daughter, offers insight, recalling a time when the Espionage and Seditions Act, became “a convenient tool to flush out socialists”, saw the rise of the Klux Klan, and animosity toward immigrants grew. Riva’s worthwhile read invokes contemplation on the limited inroads the United States has made in globalization.
For More Information: http://pegasusbooks.com/books/you-were-there-before-my-eyes-9781681775074-hardcover

Liars and Saints by Maile Meloy

The Sandalwood Tree by Elle Newmark

Heart and Soul by Maeve Binchy