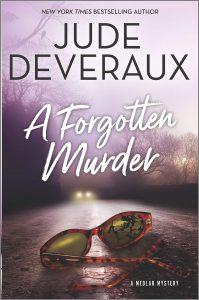 Oxley Manor, England, seat of the Earls of Oxley, saw its share of tragedies over the centuries. The latest was the death of the last heir in a car accident. Now the estate is owned by Isabella Guilford. She has turned it into a luxury hotel courtesy of financing from her friend, best-selling American author Sara Medlar. Sara and her young friends Jack and Kate visit the hotel out of season for a break from their previous harrowing adventures. Jack and Kate soon realize Sara has an ulterior motive for their stay. Her instinct for a mystery has been awakened by some interesting research.

… great characters whose adventures are lightened by Deveraux’s touches of humor.

One night years before, two people vanished from the manor never to be seen again. Sara issues invitations to all those who were there that night to reassemble so she can find out why they disappeared. Every one of them has something to hide, not least Puck, the elfin woman who was a girl at the time. What she reveals to Sara and her friends elevates the mystery beyond what any of them expect. Sara pens a live murder-mystery theater performance with the help of the guests in the hope it’ll shed light on what happened that fateful night and after. Someone present is a murderer, and that person will do anything to preserve their secret. Nobody is safe—unless Sara and her friends can uncover the truths hidden in Oxley Manor.

A Forgotten Murder is an intriguing adventure as rich and satisfying as an English clotted cream tea. Sara, Jack and Kate are great characters whose adventures are lightened by Deveraux’s touches of humor.

It’s How You Play the Game by Jimmy Gleacher