Individual episodes, as well as the entire series, can be played or downloaded for free at www.slj.com/podcasts, where users can also subscribe via RSS feed.

SLJ, a national monthly magazine for K12 media specialists and librarians who work with children and teens, has produced the podcasts, which coincide with National Poetry Month and SLJs April feature What Rhymes with Math? The article, by Barbara Wysocki, discusses poetry for elementary and middle school students, with recommended titles for using poetry to spark exploration of science, social studies, and math.

Authors of selected titles who have contributed to SLJs Poetry Podcast Series include:

Douglas Florian, author and illustrator of Zoos Who. Harcourt. 2005. David Harrison, author of Sounds of Rain: Poems of the Amazon. Illus. by Doug Duncan Wordsong. 2006. Rob Jackson, author of Animal Mischief. Illus. by Laura Jacobsen. Boyds Mills. 2006. Julie Larios, author of Yellow Elephant: A Bright Bestiary. Illus. by Julie Paschkis. Harcourt. 2006. J. Patrick Lewis, author of Arithme-Tickle: An Even Number of Odd Riddle-Rhymes. Illus. by Frank Remkiewicz. Harcourt. 2002. Walter Dean Myers, author of Jazz. Illus by Christopher Myers. Holiday House. 2006. Jon Scieska, author of Science Verse. Illus. by Lane Smith. Viking. 2004. Jack Prelutsky, author of Read a Rhyme, Write a Rhyme. Illus. by Meilo So. Knopf. 2005. Joyce Sidman, author of Song of the Waterboatman and Other Pond Poems. Illus. By Beckie Prange. Houghton Mifflin. 2005. Charles R. Smith Jr., author of Hoop Kings. Photos by the author. Candlewick. 2004. Kay Winters, author of Voices of Ancient Egypt. Illus. by Barry Moser. National Geographic. 2003. Walter Dean Myers was here to record our first podcast in what was fast turning out to be a series, says Brian Kenney, SLJs editor-in-chief. All week there has been a steady stream of poets stopping by, headed to the office of Trev Jones [SLJs book review editor and host of the podcast series] in what has become the podcast soundstage.

Poetry, after all, you most definitely want to hear. And podcasting makes these recording easily accessible to nearly anyone, anywhere, says Kenney. There are so many ways you can use these readings to introduce children to poetry in general or the specific poets in particular.

School Library Journal (SLJ) serves librarians who work with students in school and public libraries, reaching an audience of more than 100,000. The worlds largest and most authoritative reviewer of childrens and young adult content­principally books, but also including audio, video, and the Web­the magazine and its Web site (www.slj.com) also provides news, features, columns, and departments that deliver the perspective, resources, and leadership tools necessary for its readers to become indispensable players in their schools and libraries.

McGraw-Hill to Split Into Two Units 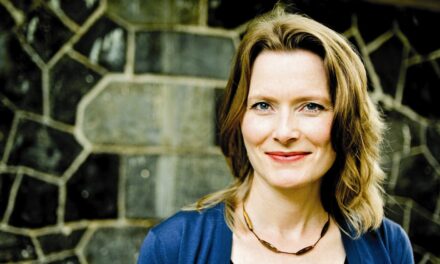