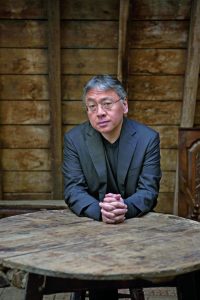 “I come in the line of lots of my greatest heroes. The greatest authors in history have received this Prize.”

Telephone interview with Kazuo Ishiguro after the announcement of the 2017 Nobel Prize in Literature on 5 October 2017. The interviewer is Adam Smith, Chief Scientific Officer of Nobel Media.

Transcript of the interview

Kazuo Ishiguro: Hi, hello, Mr Smith, how are you?

Adam Smith: Very well. Thank you very much indeed for calling, very kind. Congratulations on the award of the Nobel Prize.

KI: Yes, thank you. I’m sorry you were kept hanging on. It’s absolute chaos here I’m afraid. There’s suddenly … a lot of press has turned up and they’re queued up the road.

AS: I can imagine. So, yes, your day must have changed in a totally unexpected way. How did you hear this news?

KI: Well I was sitting in the kitchen writing an email to a friend and the phone rang. And it started off as not entirely certain. People at my literary agents were watching the live feed come through on the announcement. I don’t think they were expecting it, they were just waiting to hear who won the Nobel Prize this year. And so I started to receive calls back to back, and each time we were trying to establish if it was a hoax or if it was fake news, or what it was. And then it started to become more and more certain. By the time the BBC called I started to take it seriously. But I haven’t actually stopped since then. It’s a bit like the Marie Celeste here – everything’s exactly as it was at about 11 o’clock, or whenever, before the whole thing started. And then it was pandemonium. There’s now people queueing up the street to interview me.

KI: No! No, I don’t think it will sink in for a long time. I mean, it’s a ridiculously prestigious honour, in as far as these kinds of things go. I don’t think you would have a more prestigious prize than the Nobel Prize. And comments I would make, I mean, one is, a lot of that prestige must come from the fact that the Swedish Academy has successfully, I think, kept above the fray of partisan politics and so on. And I think it’s remained one of the few things that’s respected, whose integrity is respected by many people around the world, and so I think a lot of the sense of honour of receiving the Prize comes from the actual status of the Swedish Academy. And I think that’s a great achievement unto itself, over all these years the Swedish Academy has managed to retain that high ground, in all the different walks of life that it honours. And then the other reason it’s a terrific honour for me is because … you know I come in a line of lots of my greatest heroes, absolutely great authors. The greatest authors in history have received this Prize, and I have to say, you know, it’s great to come one year after Bob Dylan who was my hero since the age of 13. He’s probably my biggest hero.

AS: That’s nice company to be in.

KI: Yeah. I do a very good Bob Dylan impersonation, but I won’t do it for you right now.

AS: That’s a pity, I would have liked that. Maybe at least when you come to Stockholm in December, please.

AS: You must. It’s a funny time in Britain at the moment. Does that place any particular significance for you on receiving the Prize now?

KI: I think it does. I mean, in fact just before I picked up the phone to you I was writing a kind of statement for press release, and I was trying to think what could I say in three lines, and I think the timing is pertinent for me because I feel … I’m nearly 63 years old, I can’t remember a time when we were so uncertain about our values in the western world. You know, I think we are going through a time of great uncertainty about our values, about our leadership. People don’t feel safe. So I do hope that things like the Nobel Prize will in some way contribute to the positive things in the world, to the decent values in the world, and that it would contribute to some sense of continuity and decency. Yeah.

AS: I suppose what you have been writing about all this time, in a way, is that question of our place in the world, our connection to each other, our connection with the world. That is perhaps the theme you explore the most, do you think?

AS: Thank you, well, these are things to talk about on a different day I guess.

AS: For the moment you have to work out how you’re going to handle this line of press. Just a last thought – how do you feel about the deluge of attention you’re about to receive?

KI: Well, I think … I take it very positively. I mean, while it’s a little unsettling because I had no idea when I woke up this morning that it was going to be anything other than a very ordinary day, I think it’s a great thing that the press, the media, take the Nobel Prize for Literature seriously. I’ll be very alarmed if there was a day when somebody won the Nobel Prize for Literature and nobody was interested. That would suggest that some awful things had happened to the world.

AS: A day to celebrate literature has to be a good day.

KI: Yes, and I think literature can be a great thing, it can be sometimes a force for bad as well. You know I think things like the Nobel Prize for Literature exist to try and ensure that it is a force for good.

AS: Lovely. Well thank you very much indeed, and we very much look forward to welcoming you to Stockholm in December.

KI: Yeah, really looking forward to it. Well, very nice to talk to you Mr Smith.

AS: Thank you very much indeed.

Kazuo Ishiguro was born on November 8, 1954 in Nagasaki, Japan. The family moved to the United Kingdom when he was five years old; he returned to visit his country of birth only as an adult. In the late 1970s, Ishiguro graduated in English and Philosophy at the University of Kent, and then went on to study Creative Writing at the University of East Anglia.

Kazuo Ishiguro has been a full-time author ever since his first book, A Pale View of Hills (1982). Both his first novel and the subsequent one, An Artist of the Floating World (1986) take place in Nagasaki a few years after the Second World War. The themes Ishiguro is most associated with are already present here: memory, time, and self-delusion. This is particularly notable in his most renowned novel, The Remains of the Day (1989), which was turned into film with Anthony Hopkins acting as the duty-obsessed butler Stevens.

Ishiguro’s writings are marked by a carefully restrained mode of expression, independent of whatever events are taking place. At the same time, his more recent fiction contains fantastic features. With the dystopian work Never Let Me Go (2005), Ishiguro introduced a cold undercurrent of science fiction into his work. In this novel, as in several others, we also find musical influences. A striking example is the collection of short stories titled Nocturnes: Five Stories of Music and Nightfall (2009), where music plays a pivotal role in depicting the characters’ relationships. In his latest novel, The Buried Giant (2015), an elderly couple go on a road trip through an archaic English landscape, hoping to reunite with their adult son, whom they have not seen for years. This novel explores, movingly, how memory relates to oblivion, history to the present, and fantasy to reality.

Apart from his eight books, Ishiguro has also written scripts for film and television.

The Gourmet / directed by Michael Whyte ; screenplay by Kazuo Ishiguro, 1986

The Remains of the Day / directed by James Ivory ; screenplay by Ruth Prawer Jhabvala, 1993

The Saddest Music in the World / directed by Guy Maddin ; screenplay by Kazuo Ishiguro, 2003