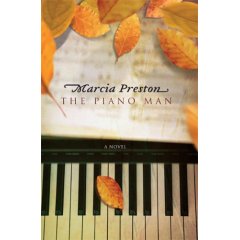 We've all seen commercials that tug at our heartstrings. Author Marcia K. Preston turned her emotional connection with one such commercial into a compelling story of loss and redemption.

"The idea for The Piano Man came to me from a TV commercial. The promo was for a local hospital that does transplants, and it showed a mother placing her hand on the chest of the man who'd received her son's heart. Every time I saw it I cried, and the writer in me thought, there's a story there," said Preston.

She traced down the man and the mother in the commercial and interviewed them. From that came the intriguing idea of a mother connecting with the man who received her son's heart and changing the recipient's life. "Organ donation exchanges death for life, an amazing opportunity that can be healing on both sides of the equation," observed Preston. "I often work weekends and evenings, and seldom watch TV."

Preston is the author of She'll Die and Song of the Bones, mysteries set in rural Oklahoma, whose heroine, Chantalene, is the daughter of a gypsy mother and a redneck father. She is also the author of The Butterfly House.

In addition, Preston is the editor of and publisher of ByLine, a trade magazine for writers ( www.bylinemag.com). She has also done extensive freelance writing national and regional magazines.

She began writing in high school, but wrote "pathologically" as a young mom with two children and no car. "I wrote to hear another adult voice, at least in my head. I wrote short stories and sent them out to women's magazines. The stories were absolutely terrible," said Preston.

Preston focuses on creative writing in the early morning hours for three or four hours at a stretch and works as the editor of Byline in the afternoons. "I often work weekends and evenings, and seldom watch TV," she noted. After several tries at literary fiction, Preston decided to focus writing a mystery. She met her first agent at a writer's conference. He sold her first book. "I'm a firm believer that a bad agent is worse than no agent. Researching the agent's background

She found her current agent, Elaine English, through a colleague of English's at a conference in Oklahoma. "She didn't handle my kind of book, but volunteered to pass the proposal to Elaine. I had researched her agency online and read about some of their deals in other venues, and liked what I saw. I was thrilled when Elaine asked to see the full manuscript," said Preston.

Preston submitted The Butterfly House to English after she'd sent the full manuscript to a publishing house more than a year before. Ironically, the publisher called with an offer before English had a chance to read the manuscript.

"She read it over a weekend, phoned back and said she'd be happy to represent it. She took over the contract negotiation and did a great job. She's also an attorney, and she's quite responsive to my questions and needs. I'm extremely pleased with her representation," said Preston. She advises, "I'm a firm believer that a bad agent is worse than no agent. Researching the agent's background is essential homework."

With success across genres, Preston believes it is the quality of the writing that makes the greatest difference in a book's success. "There's not a lot of difference between writing mysteries and writing mainstream fiction. Both need story and suspense and interesting characters. I tried mysteries to teach myself to plot, because I'd been writing sort of literary stuff which wasn't selling, possibly because there wasn't much plot." She tracks the book's plot twist using a story arc method that employs "plot points, pacing, and a knowledge of archetypal characters that readers respond to without even realizing it" found in How to Write Killer Fiction by mystery writer Carolyn Wheat. "I had to produce a book on contract in one year. That scared me to death."

"It deals with mystery and suspense novels, but I've found the ideas apply to any kind of novel," she noted. Preston will be teaching a four-day novel class that includes the story arc process at the Southeastern Writers conference this June on St. Simon's Island, GA.

While she has attended classes, read books, been part of critique groups, Preston believes the only way you learn to write is alone in your chair, with practice and through the analytical reading of really good writers.

Her greatest challenge when writing The Piano Man was meeting her deadline. "I had to produce a book on contract in one year. That scared me to death. I'd sold three books before it, and spent years on each one (seven years on The Butterfly House). I write slowly. For me it takes time for characters and plot to develop, and I'm a fanatic on revising lots of drafts. I thought, 'This is how hack writers are made.' I was terrified of putting a book out to readers before it was ready, before it was the best I could make it," said Preston.

She worked with Editor Miranda Stecyk at Mira on The Butterfly House and The Piano Man. "I knew when I sent Piano Man to her at deadline time that it needed more work. But I was ready for feedback, and she gave me excellent input and suggestions. We discussed ways to make the book better, and I was grateful for her insights," said Preston.

Preston, who quipped, 'I can cut 200 words from a 100-word piece,' worked with Stecyk to enhance the story by adding elements of setting and going deeper into the characters' thoughts, motivations, reactions to events. "Seeing any of your own books

is an orgasmic experience."

"I search my mental images of the story for significant details the bottle-cap collection in the back corner of the closet, the mirror with a crack shaped like half a heart. Such details give little windows into the lives of these people, even minor characters," observed Preston. She suggests that new writers take their time and don't be in a huge rush to send the manuscript out. "The more drafts you do, the better it will get. And second, of course, never give up. Just keep writing and getting better until you've produced a book so good it has to sell."

When success comes it is sweet. "Seeing any of your own books in a bookstore is an orgasmic experience. I once took a picture of The Butterfly House on the shelf in the Barnes & Noble at Concourse C of the Houston airport. I know the store manager thought I was crazy."

Her next book, slated for publication in 2007, is about a young mother separated from her baby when the Berlin Wall goes up in 1961.

Marcia K. Preston ( www.marciapreston.com) writes mysteries and mainstream novels, and is editor and publisher of Byline, a trade magazine for writers ( www.bylinemag.com). Her second book, Song of the Bones, won the 2004 Mary Higgins Clark Award for suspense fiction and the Oklahoma Book Award in Fiction. She lives on a creek in central Oklahoma with her husband Paul, where they garden and dodge tornadoes. About Regular Contributor 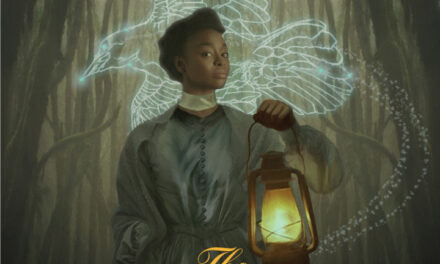 Palma Offers Escape from the Mundane with Map of the Sky

Liebert Explores Those Secrets We Keep – 2015