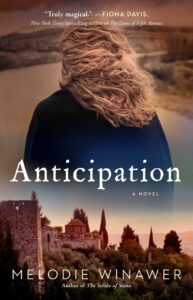 Melodie Winawer’s second novel Anticipation is a historical novel that spans generations and combines science, romance, and suspense to tell a story of hope and healing. After the death of her husband, Helen, overworked in her job as a scientist and overwhelmed by single parenthood, escapes with her nine-year-old son Alexander to Greece. They wander into the ancient city of Mystras and are entangled with its only resident is Elias, a mysterious tour guide living on the city’s edges. Winawer shares her journey in creating Anticipation.

AUTHORLINK: Tell me about your apprenticeship as a creative writer. Did you have a mentor(s) who offered advice that has stayed with you that you can share with us?

“He helped me find that easy voice that goes straight from the head onto the page without overthinking.”

WINAWER: My high school English Teacher, Harry Bauld, told me in 11th grade: “write with the ease with which you talk.”  He helped me find that easy voice that goes straight from the head onto the page without overthinking. I bumped into him in a New York City park right after I’d finished my first novel, THE SCRIBE OF SIENA, and he helped me find my first editor, and later, my agent.

AUTHORLINK: I’m intrigued by your work as a physician-scientist. What skills from that work have carried over into novel writing?

WINAWER: The way I do scientific research goes something like this: I come up with a question I don’t know the answer to. First, I try to look up the answer myself. I read, and then I read more. I ask colleagues with expertise. If no one knows the answer, or even better, if there is disagreement or controversy about the answer, that’s when I know I’ve found my next research project. In scientific research, my job is to be fully grounded in facts. But in fiction, uncertainty is an opportunity for invention. In other words, I get to make things up. That is the incredibly fun antidote to my satisfying but highly structured scientific work, in which I never get to make things up.

“I read and read until I populate my head with information…”

Also, my process of research for science and research for a novel (particularly historical fiction) are somewhat similar: I read and read until I populate my head with information, and from that matrix of knowledge comes either a new project or grant application (science) or a new world (fiction) that I can populate with characters and bring to life.

WINAWER: The origin of my stories is totally unpredictable, almost magical. Three actual examples for books I haven’t written yet include: Birds arching overhead as I was entering a Brooklyn subway station on a brisk fall day; the night I had to pick up my son after school in a deserted Vermont cemetery; a loudspeaker announcement about the lunch menu in the nursing home where I used to work.  I get this “OK, here comes a novel” feeling and then the story grows out of it.

AUTHORLINK: Where did the idea for Anticipation come from?

WINAWER: In the summer of 2015, while seeing patients in Columbia’s Neurological Institute, I found myself with a break, which almost never happens. I walked down the hall, where I ran into Michael Daras, a Greek neurologist and colleague for over 20 years. I was thinking of taking my family to Greece and asked Michael for advice. He happily followed me into my office and started making suggestions, drawing a map on the back of an old manila envelope.  I watched him draw the three-fingered hand shape of the Peloponnese, and then, near the middle finger of that peninsula that extends south from Greece’s mainland, he wrote the word “Mystras.”  He looked up from his sketch.

“An abandoned medieval city,” he said.

My family did end up traveling there, and the reality of the place—now in ruins, but once the capital of the late Byzantine Empire–was even more remarkable than I’d imagined: the winding stone streets, the looming walls and hilltop fortress, the domed churches painted with frescos, empty except for the nuns of the Pantanassa monastery, and a donkey tethered to a tree on the sunny hillside.

That’s how ANTICIPATION started—with the place.  The people came next.

AUTHORLINK: Who are your influences when it comes to writing a book that crosses time?

“…I strongly believe the best education for a writer, besides writing, is reading.”

WINAWER: I try not to be influenced too much.  In fact, with this book, in particular, I avoided reading anything like what I was writing.  But I strongly believe the best education for a writer, besides writing, is reading.  And I do like to see how other writers do things, particularly dual or multiple timelines. It helps me get a feeling of what works and why.  Some great examples of authors who cross time beautifully are Kate Atkinson, Audrey Niffeneger, Kate Mosse, and Fiona Davis.

AUTHORLINK: How did you determine the structure of the book and how hard was it to integrate the storylines in each thread?

WINAWER: I drew a diagram—that was how the story shaped itself in my head.

Was it hard to integrate the storylines?  It’s challenging but it’s also something I do naturally—I like to make a web of connections, some of which are easy to spot, and some more subtle. Some I don’t even realize I’m doing until afterwards.  Sometimes an element that links the story together across multiple times is something obvious and concrete, like the Chronicle in ANTICIPATION, and sometimes it’s something small like a single repeated word that shows up at the end of one section and the beginning of another. It’s as much poetry for me as it is plot.

AUTHORLINK: What were the greatest challenges when writing Anticipation and how did you overcome them?

“Writing into the void is terrifying—there is no certainty that the story will happen at all. “

WINAWER: There are two essential challenges to writing: getting the words on the page for the first time and then revising them. Writing into the void is terrifying—there is no certainty that the story will happen at all.  Revising is terrifying too, because you have to tear everything apart and put it back together again.  How did I overcome those challenges?  Not giving up. I knew I had to finish it and so I did.

There’s another challenge that I am sure many writers share: lack of time.  I have a more than full time job as a doctor-scientist. I see patients, I do research. I ran courses in the medical school. I have three kids, too. It’s hard for me to imagine how a book could possibly fit into that schedule. But it has to, because when I do not have a story in my head, I’m miserable. I overcame that challenge out of sheer necessity—and love.

AUTHORLINK: Did you surprise yourself in the writing of the novel?

WINAWER: I am always surprised when I write!  That’s part of the fun.  I planned this one more than I did my first novel THE SCRIBE OF SIENA, which I likened to driving in a snowstorm in the dark. But I still don’t really know what is going to happen until it goes on the page. Also, I never thought I would sell an unfinished manuscript. I didn’t believe I could write on demand, with a signed contract, to make up a story that wasn’t even finished, and do it on deadline. Accomplishing that surprised me. The moment I finished the last sentence of my first draft of ANTICIPATION I stood up at my desk and started to cry, I was that overwhelmed.

WINAWER: A relationship with an editor is just that—a relationship. It’s intimate, challenging, sickening, supportive, exhausting, and blissful.  The changes were huge, and yet it’s still the story I wrote. That is what makes a great editor. The first draft was seven hundred and eighty pages!  That gives you an idea of how much cutting I had to do. I also added an entirely new section, which was daunting but exhilarating too. My editor, Kate Dresser at Gallery Books, wanted me to add an entire section on the Greek War of Independence. That meant not only a lot of pages, new characters, etc, but an entirely new century.  I had to learn about 1800s Greece…from scratch. On deadline!  But it was the right thing to do, and I’m so glad she told me to do it.  With every editor I’ve worked with, I’ve learned my capacity for revision. I also learned that the editor isn’t always right, and sometimes you have to stand up for the story the way it is politely.

“Don’t edit while you write. Just GET THE WORDS ON THE PAGE. You will fix it later.”

WINAWER: If you want to write, write. Thinking you want to write won’t get you anywhere. When you write a draft, write without self-censorship. Don’t edit while you write. Just GET THE WORDS ON THE PAGE. You will fix it later. Don’t write for fads, don’t choose what you write because you think it will sell, don’t take advice from other people about what you should write. Write the stories that you have to write, and don’t give up.

WINAWER: I just submitted a grant to the NIH on artificial intelligence/deep machine learning as it applies to imaging in epilepsy, and I’m writing another one due in six weeks…does that count?  In the fiction realm, I’m working on a novel based in Minoan Crete. That’s a whole new era to learn about—the 15th century BCE.  I guess I like challenges!

Melodie Winawer is the author of The Scribe of Siena, which has been translated into German, Czech, Polish, and Norwegian to critical acclaim. She is also the author of the forthcoming Anticipation. A physician-scientist and associate professor of neurology at Columbia University, Melodie has published over fifty articles and contributed to several anthologies. To find the energy to write, she relies on unflagging enthusiasm and green tea. Melodie lives with her spouse and their three children in both Brooklyn, New York and Ludlow, Vermont. 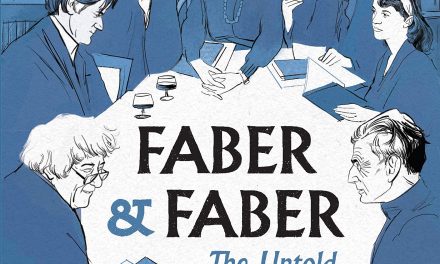 Chris Abani Writes About a Journey of Self Discovery