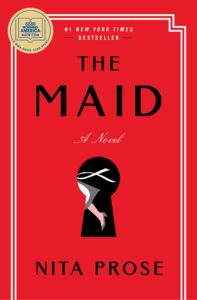 Molly Gray lived with her grandmother and worked as a maid at the Regency Grand Hotel. Molly always struggled with social skills, and her grandmother taught her ways to cope. But then gran died and Molly was on her own. To make matters worse, the relatively easy-to-navigate chores of cleaning rooms to perfection is interrupted when Molly finds one of the hotel’s most well-known guests murdered in his bed. When the police question Molly, her unusual way of responding makes her the prime suspect. Now it is up to Molly and her friends who appreciate her for who she is to solve the mystery.

AUTHORLINK: What was the first idea for this story that came to you?

PROSE: The idea for The Maid came to me during a business trip to London in 2019. I was staying at a hotel, and one day, after a breakfast meeting, I returned to my room and completely surprised the maid who had come to clean it. I remember her gasping and taking a step back into a shadowy corner. This maid was holding up my sweat pants that I’d foolishly left in a tangled mess on the bed. It occurred to me in that moment what an intimate and invisible job it is to be a room maid. Simply by cleaning my room day after day, she knew so much about me. But what did I know about her?

A few days later, I was on the plane home when it came to me: Molly’s voice—clear, clean, precise—”polished to perfection.” I grabbed the napkin from under my drink and I wrote the prologue in a single burst.

I didn’t know it then, but I’d just begun my debut novel.

AUTHORLINK: How did you develop Molly’s character and her characteristics?

PROSE: The fun parts of writing are the discoveries that happen as you write. I often felt as though Molly, the protagonist of The Maid, channeled herself through me. It’s quite a rush when that happens for a writer.

Molly is an extremely diligent worker and a person who finds it easier to live by a set rule book rather than to improvise according to what life throws at her. Something important to me was that readers not approach Molly with any preconceptions. Therefore, I didn’t want her to be labeled as different or as “other.” This is a novel about what it means to be the same as everyone else … and yet entirely different. If I flagged the “different” part, readers might miss the most important part—how Molly is the same as all of us.

AUTHORLINK: How much did you plan before you wrote? Without giving away anything, did you know who did it and how Molly would be involved and how various other people involved would be found out?

PROSE: I knew many of my twists and turns for the outset, but what I did not know is how they would play out. This served as motivation for me as a writer, because it gave me a big “how” to resolve through the writing process.

AUTHORLINK: I have to ask about the colorful Clue-like names of many of your characters (which can also include Snow and Stark). Can you comment on that?

PROSE: On my mental mood board for this book are few central influences—Agatha Christie, the uplit novel Eleanor Oliphant Is Completely Fine, the film Knives Out … and the board game Clue. Because my novel is a cross-genre novel that is character-driven on the one hand and a mystery on the other, I decided to play with the whimsy of the traditional whodunnit. As such, I worked with the conceit of the board game Clue. I try to get the reader asking Clue-like questions about the settings, the characters, and their potential motives for murder. Who killed Mr. Black? Was it Mr. Snow with poison in the lobby? Or was it Miss Molly Gray with a pillow in the penthouse? And so on….

AUTHORLINK: Universal acquired rights to your debut novel before it was released. Can you describe how this happened and how you felt at the time?

PROSE: There were various players at the table when it came to optioning the film rights for The Maid. But when I was presented with the magical combo of Universal Pictures making the film with Academy Award nominee Florence Pugh set to star as Molly, I simply could not imagine a better combination. Pugh makes the most unusual choices in her performances, and as such, she’s absolutely beguiling to watch in every role she plays! I cannot wait to see how she brings Molly to life on the screen.

AUTHORLINK: How are you involved in the production? What is currently happening with it?

PROSE: At the moment, all I can say is that I can’t say anything that hasn’t already been revealed. But just know I’m smiling like a Cheshire cat as I write this.

AUTHORLINK: You’ve been an editor for many other successful authors. How did that experience impact your own writing and editing process?

PROSE: I’ve learned everything about the craft of writing from my work as an editor and ghostwriter. I credit the many authors I’ve worked with and the story-obsessed people in the publishing industry with teaching me everything I needed to know to write The Maid.

When I’m editing a debut author, I often explain “the labyrinth,” a metaphor for the editor-author relationship. When a writer writes, she embarks upon a journey into a labyrinth. She’s on the ground, entering the maze. She can see what’s just up ahead, a barrier or a surprise down the corridor. She does not want to write herself into a corner.

I, as her editor, am seated on a tall ladder outside of the maze. I can’t see close-up the way she can, but I have a bird’s-eye view. I can tell her that if she goes down that passage, it will lead to a dead end. Together, we work best: we help each other see.

While I knew this paradigm intimately as an editor, I had never experienced what it’s like as a novelist—to be visionary and completely blind at the same time! I have a newfound appreciation for the courage it takes to write and for just how disorienting the process can be.

AUTHORLINK: How do you hope people respond to the book in terms of perceived differences between themselves and others?

PROSE: My goal in creating Molly—a character with a unique worldview and boundless empathy for others, despite any difficulties she has with social cues—was to invite readers to step into Molly’s skin, to live as her without any preconceptions. I hope that to live as her is to love her.

AUTHORLINK: Do you have any new projects that you are working on?

PROSE: In the creative antechamber of my mind, there are many voices and characters clamoring to be heard. I’m working away on a few possible novel ideas, but true to theme, I’ll leave the details a bit of a mystery.

About the Author: Nita Prose is vice president and editorial director at Simon & Schuster in Toronto, Canada. She has worked with many bestselling authors and their books. She claims her house in Toronto is only moderately clean. 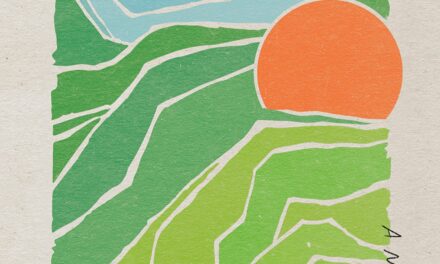 Corporon Tells Her Own Story Through Tenacity and Family History