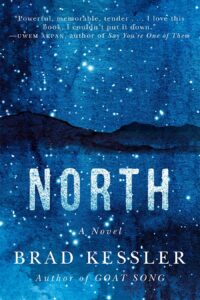 In his fourth book, North, Brad Kessler tells a story of a boundary-expanding encounter between a Somali refugee, a Vermont monk, and an Afghan War veteran that poses important questions about boundaries and belonging.

Sahro Abdi Muse has traveled from Somalia to South America through Central America and Mexico to New York. She decides to cross the border into Canada rather than take her chances with a hostile judge. A snowstorm and illness leave her stranded at the Blue Mountain Monastery where she encounters Father Christopher, who is questioning his faith, and Teddy, a groundskeeper, who is looking for peace after serving in Afghanistan.

This terrain is not new to Kessler. His first book, Lick Creek, told the story of a Jewish migrant from Russian who ends up in a small town in Appalachian West Virginia. His second, the critically acclaimed Birds in Fall, centers on a disparate group of people who gather in Nova Scotia hoping for news about loved ones after a flight to Amsterdam plunges into the Atlantic nearby.

“The foreigner falling into a place that is unknown is a particularly American story, the way all of us have kind of fallen from around the world onto this continent,” said Kessler. This concept offered him an opportunity to explore the ideas of settlement, sanctuary, and displacement.

In 2010 Kessler had started writing North and meant it to take place in a near dystopic future. He considered the idea of writing about a coming plague but rejected it as too far-fetched.

Kessler lives beside a monastery on a goat farm in Vermont he runs with his wife, the photographer Dona Ann McAdams. He was driving over the Green Mountains on Route Nine, when he thought of the monks on his mountain looking down on the lowlands seeing the cities burning below.

“I’ve always been obsessed with the idea of sanctuary…”

“I’ve always been obsessed with the idea of sanctuary, with a place of remove that is both in time and timeless, where people live in rural isolation, and what happens when the outside world enters that sanctuary. Who gets to live inside the enclosure and who’s left out,” said Kessler.

In North, the introduction of an immigrant into an enclosed world forces a reexamination of faith, culture, and legacy, as the characters share stories and assess their pasts.

“Once I got rid of the plague idea, it was always going to be about the immigration issue because back in 2011 the world was falling to pieces, the crisis in Syria, the crisis in North Africa. My wife is a photographer who was photographing men and women seeking asylum in the United States,” said Kessler.

He heard the stories of people from across the globe who were struggling to get asylum. When Trump was elected and enacted a Muslim ban, Kessler knew the story had to take place not in the future, but the present day.

North is the story of three people: two White American men and one Black African woman. But Kessler didn’t take the task of writing a black female from Africa lightly. He set the book aside for three years and immersed himself in the work of the U.S. Committee for Refugees and Immigrants (USCRI) Vermont. He met Fardusa Abdalla Abdo, who came to the United States after fleeing Somalia and later Yemen, where she had lived as a refugee and a single mother with six children.  With the help of her son Mohamed and a member of the USCRI, Kessler learned Abdo’s story over the course of two years.

The biggest challenge of writing the book came from him as a middle-aged, White, man writing about a Black woman from Africa who is Muslim. “How could I have the temerity, the gall, the hubris to try that without appropriation or misrepresentation?” said Kessler. He worked hard to connect with the Somali community.

As he noted in the afterword:

I wrote this book in—and against—the White settler tradition in which I was raised, knowing I could never see enough, know enough, experience enough, beyond my own blind spots and ignorance. Beyond my own body. My aim was not to extract from, but ally with.  To give an offering, an accompaniment.

Toward this end, the book includes a bibliography and further reading by Somali writers and poets. “The amazing complexity and richness of Somali storytelling was something to acknowledge and bring forward,” said Kessler. In addition, all royalties of the North American sales of North will be donated to USCRI Vermont.

Kessler is also participating in a storytelling project with the Somali community in Burlington where he serves as a ghostwriter for their stories which will result in a book that they can pass on to their children.

“…go deep into yourself and ask why you are doing this. Who’s benefiting?

His advice to other writers seeking to cross boundaries in storytelling is to get to know the borders they are crossing. “Get to know their literature first. Learn the literature of the country or place you are writing about. Learn about the people themselves. Then go deep into yourself and ask why you are doing this. Who’s benefiting? What are you gaining? Get to know yourself and how you fit into the whole system,” said Kessler.

He is now at work on a nonfiction book on different ways of conceiving what depression is, through the lens of myths, the natural world, and language.

About the Author: Brad Kessler is the author of two critically acclaimed novels, Lick Creek and Birds in Fall, which was a recipient of the Dayton Literary Peace Prize, and a memoir, Goat Song. He has been awarded a Whiting, a National Endowment for the Arts Fellowship, and the Rome Prize from the American Academy of Arts and Letters. His work has appeared in The New Yorker, The Nation, the Kenyon Review, and BOMB. He lives in Vermont.

Nikolai Grozni: Writing From Experience Creates a Crack in the Décor