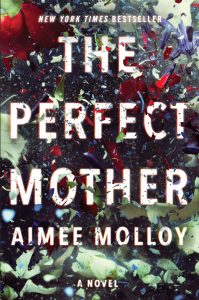 The May Mothers and their newborns meet regularly for companionship and commiserating. Their decision to spend a night out having fun without their babies becomes tragic when one baby goes missing. While the police dilly dally, the media hypes and humiliates them, and their own lives start to fall apart, three of the women obsess over trying to find out what happened to Winnie’s baby.

MOLLOY: After my first daughter was born in 2013, I signed up for September Babies, a new mom’s group in Brooklyn. I was a little skeptical about this at first (a new mom’s group in Brooklyn? Far too cliché for me!) but the skepticism dissolved almost immediately. I had no family around to help, and very little experience with infants and September Babies became my lifeline. Though some members met in person, most of our interaction was via a listserve—a place where people asked questions (is this normal…? Should I be worried…? Will they ever sleep?). I was blown away by the generosity and encouragement the members showed one another. Perhaps it was the sleep deprivation, but I envisioned us—a relative group of strangers—as a tribe of women who had banded together, and the question occurred to me: what if, god forbid, one of our babies went missing? I could see the members of the group, black war paint under our eyes, torches in hand, combing the town until the baby was found. I remember I was riding the subway, my daughter strapped to my chest, and pulling out a notebook, jotting down notes on this idea. A few years later, those notes had become The Perfect Mother.

AUTHORLINK: Did you know where the story was going when you started writing or did you need to go back and revise scenes and details to match the eventual outcome?

MOLLOY: The only thing I knew from the beginning was a general sense of how the story ends—the who of the whodunit. To get there, I went through many, many drafts; story lines that were erased; several characters that didn’t make the final cut. I try to write every day, and I save the document under a new name at the end of each session and I bet if you go through the 300+ documents of THE PERFECT MOTHER you’d see that the first draft and the last draft are somewhat unrecognizable from one another.

AUTHORLINK: Was it hard for you to write about a missing baby when you had such young children yourself?

MOLLOY: Not really (no offense to either of my children). But for me, the main experience of writing the novel was exploring the characters. Each of the three main narrators—Francie, Nell, and Colette—are dealing with their own unique experience of becoming mothers, and sorting them out was the major work for me. If anything, having very young kids helped the writing because I was still in the muck of it, and drew a lot on my experience and anxieties.

AUTHORLINK: Each of your central characters has a distinct story, characteristics, and problems of her own. How did you develop them?

One thing I learned from the process of writing my first novel is that when I’m stuck, it means I don’t know the character well enough.

MOLLOY: One thing I learned from the process of writing my first novel is that when I’m stuck, it means I don’t know the character well enough. Once you really know a character, you almost instinctively know what happens next, because you know what everyone in the story would be doing. The Perfect Mother is an ensemble cast of five main characters, so it was quite a bit of upfront work just getting to know them. I did character sketches for each of them—several pages of free writing where I told myself their life story. Where they grew up. Their childhood hobbies. The relationship their parents had. Lots and lots of obscure details, few of which made it into the book, but it helped me really get to know them.

AUTHORLINK: What stands out to you about the differences in writing non-fiction and fiction?

MOLLOY: One big difference is when you sell a non-fiction book, you sell it on a proposal. You have to write fifty really good pages and you have to outline what you’re going to say in this book. When the hard work begins of actually writing the book, you know that you’ve sold it, you know that it will be published and that you have the support of a publisher behind you.

I’ve always had so much admiration for novelists because for them it works the opposite. Not only do you have to write the entire book, but you have to have it perfect. And the amount of determination and stamina and confidence that you need to have to keep writing that story, knowing that there’s some chance that nothing will happen with this book, is astounding.

AUTHORLINK: How did you feel – first, when your book was to be published – then when it was also going to be a movie?

I learned to keep writing through the awful first months and the very bad drafts and when it was finished—I mean really finished, like eighth draft finished—I felt ready to push it out…

MOLLOY: I had many days writing the novel that I believed that if I ever finished the thing, I’d make my husband and mother read it, they’d say a few nice things and then that would be it—into a drawer it would go. But I learned to keep writing through the awful first months and the very bad drafts and when it was finished—I mean really finished, like eighth draft finished—I felt ready to push it out into the world. The publishing and movie deal happened within two or so weeks of each other, so it was all a bit of a whirlwind, but just generally exciting.

AUTHORLINK: Tell us how your book went from a first novel to a major motion picture. How did Kerry Washington get interested in it? Who is she playing?

Elisabeth Weed, my agent, thought the book had film potential so she gave it to Michelle Weiner, a film agent with CAA…

MOLLOY: Elisabeth Weed, my agent, thought the book had film potential so she gave it to Michelle Weiner, a film agent with CAA. Michelle has some sort of secret, magical powers and before I knew it, a bunch of producers were interested in optioning the story. When I heard that Amy Pascal from Pascal Pictures was interested, I knew right away I wanted to work with her. As we were in discussions, Kerry Washington joined the team, both as a producer and the star of the movie. The book is currently being adapted into a screenplay and we’re not yet saying who Kerry is playing. (Sorry!)

AUTHORLINK: Have you had any involvement in the movie?

MOLLOY: My major involvement is waiting with bated breath to see what the incredibly talented screenwriter hired to adapt the book has created.

AUTHORLINK: How has your life changed since the day before you started writing this book until now?

It hasn’t really. I still sit down at my computer every day, open the story I’m writing, and do my best to stay true to it.

AUTHORLINK: What comes next for you?

MOLLOY: I’m currently working on my second novel, while also doing everything I can to support Immigrant Families Together, which is raising money to reunite parents and children separated by the cruel “zero tolerance” policy at the border. If you want to learn about the great work they’re doing, you can visit www.immigrantfamiliestogether.com.

About the Author: Aimee Molloy has championed strong women, mothers, and babies in her earlier non-fiction books and articles. She co-wrote Pam Cope’s autobiographical Jantsen’s Gift about a woman who turned personal tragedy into a mission to help others. However Long the Night: Molly Melching’s Journey to Help Millions of African Women and Girls Triumph received praise from President Jimmy Carter and Hillary Rodham Clinton. Molloy lives in Brooklyn with her husband and two daughters. 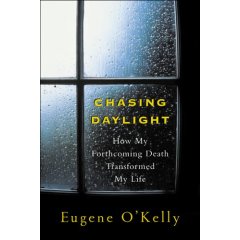 Eugene O’Kelly Writes of Forthcoming Death With Inspiration for Others

Lisa See’s Dreams of Joy, A Captivating Tale of Chinese-American Love and Passion