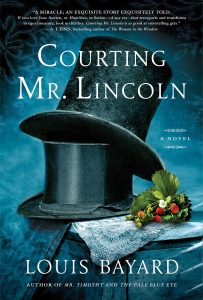 From the prizewinning author of Mr Timothy and The Pale Blue Eye comes Courting Mr Lincoln, the page-turning and surprising story of a brilliant and melancholic Abraham Lincoln and the two people who loved him the most; his handsome and charming confidant (and roommate), Joshua Speed, and the spirited young debutante, Mary Todd, whom he married.

Described as ‘a triumph of a novel’, Courting Mr Lincoln, takes no definitive stand on its’ subject’s sexuality, but neither does it shy away from the question and almost reinvigorates history ‘as if he witnessed it first-hand.’

AUTHORLINK: Mr Bayard, Courting Mr Lincoln, your latest historical fiction was a pleasure to read. We are so pleased to have an opportunity to talk to you today about this and your writing in general. Your novel focuses on the relationship between Abraham Lincoln and his future wife, Mary Todd – as well as his handsome best friend, Joshua Speed. Lincoln shared a bed with his friend for three and a half years, (as bachelors often did in those days) while living in Springfield, Illinois. Yet, there has been some suggestion that they were more than just friends in C. A. Tripp’s deeply revealing, The Intimate World of Abraham Lincoln (Free Press, 4 January 2005) which triggered your own journey on this subject. Can you tell us a bit about why you wanted to revisit this part of history?

BAYARD: Over the past two decades, the scholarly community – inspired partly by Tripp – has really been grappling with the question of what Speed and Lincoln meant to each other. Whereas fictional representations have been lagging behind. I figured it was time to put the subject front and center in a full-length novel.

AUTHORLINK: Good for you! The result is a fascinating read. What was the hardest thing about writing Courting Mr Lincoln? What was the easiest?

“…the hardest part of any book – for me, anyway – is finding the right voice.”

BAYARD: Really, the hardest part of any book – for me, anyway – is finding the right voice. There’s a lot of trial and error involved, and of course, the voice changes a bit as the book goes along, so you have to go back and revise accordingly.

As for the easiest part, I’m still waiting to find it!

AUTHORLINK: Haha, understood! You have said in the past, “I’m always looking for the blanks in the historical canvas – the people and things that nobody really knows about.” (Bookpage, March 2014) Women in history are traditionally under the radar because, in fact, they weren’t considered important enough to be written in the history books. Are there any women in history you might like to write about?

BAYARD: Well, I’m currently essaying the mystery that was Jackie Kennedy, who was as far from anonymous as you can get, but she’s enduringly enigmatic and interesting. I’ve always thought there’s a great book to be written about Shakespeare’s daughters. I don’t know if I’m the one to do it, but I think somebody needs to attack the commonplace that Shakespeare left behind no copies, no literary “heirs.” I mean, how would we even know? What space would his daughters have been granted for their talent?

AUTHORLINK: That sounds fascinating! You have been a professional writer since 1995. Prior to that, you worked in politics – a press secretary (attache de presse) for U.S. Representatives in Congress. In addition to novels, you write reviews and essays for the New York Times, Washington Post and Salon.com. What made you decide to sit down and write a novel in the 90s?

BAYARD: I guess it was dawning on me that, if I wanted to read a particular kind of book, I was going to have to write it myself. And I do think writers write because they have to. They can’t imagine doing anything else. Or they’re not fit for anything else.

AUTHORLINK: How do you think you have evolved as a novel writer from your first book?

“…with each new book, I feel like I’m starting over. “

BAYARD: I’m not always sure I have evolved – only because, with each new book, I feel like I’m starting over. I keep waiting for it to get easy. One thing I can say is that I write a little less than I used to. I trust the words more, or maybe I just trust the reader more.

AUTHORLINK: That’s interesting, thank you. Alyson Publications was a book publishing house which specialised in LGBT fiction and non-fiction and published your first book on the strength of your un-agented manuscript. Later, you didn’t want to be pigeonholed into a specific genre, so you branched out and looked for an agent. How many attempts did you make before you finally found one that took you on? Are you still with them today?

BAYARD: Yeah, I did it the “wrong way.” Which is to say that, after a few bruising encounters with agents, I just took my work directly to the publisher. But then I conceived the idea of writing a book about Tiny Tim, and it felt immediately like a “bigger” idea that needed a bigger house, which meant I needed an agent. A reader of mine put me in touch with Christopher Schelling. We hit it off instantly, and then he sold the book to Harper Collins, which was where I met my wonderful editor, Marjorie Braman, and that was love at first sight, too. Looking back, I can see how fortuitous the whole sequence was, but at the time it just seemed like a natural progression.

Christopher and I parted amicably a couple of years ago.

AUTHORLINK: You went from writing contemporary gay fiction into several novels of historical fiction, and along the way, come to distrust the ‘whole notion of genre’; which some consider simply labels for marketing. Is this how you feel? Is it just about voice, plot, and story at the end of the day?

BAYARD: For me, it’s the story preeminently – which, yes, will get you kicked out of certain academic and literary circles. One of the nicer trends, though, in recent years has been watching so-called “literary” novelists like Michael Chabon and Colson Whitehead working unapologetically in genre. So maybe those boundaries are breaking down. I do believe that being a genre writer has made me a better writer.

AUTHORLINK: You also teach creative writing. You once said, “That’s the mistake I see in aspiring young writers. They blast you with words. They want their voices to be heard. It’s hard to convince them they could be heard much better if they just pare away a lot of that stuff.” (Forth, 16 April 2010) That’s great advice. What other advice would you give to new writers? What kind of ‘good writing’ makes you stop and take notice of some of your students and not others?

BAYARD: Whether it’s student writing or professional writing, I’m always listening for the voice. You can finesse other things – plot, character, grammar – but if the voice isn’t secure, a story won’t cohere.

As for what I advise student writers, it’s pretty simple: Read everything you can get your grubby little hands on.

AUTHORLINK: Who is your first reader? Do you read reviews of your books written by readers? Do you take any notice of constructive criticism?

” …I don’t send anything out into the world until I’m feeling moderately okay with it. “

BAYARD: My first reader is me, I suppose. I don’t send anything out into the world until I’m feeling moderately okay with it. From there, it’s my agent and/or my editor. Otherwise, I keep it pretty close to my vest. I don’t even talk about it much.

For the sake of my mental health, I’ve weaned myself off reading my Amazon and Goodreads reviews because, being a neurotic, I tend to dwell on the bad and disbelieve the good. I do read my professional reviews in a fairly cursory way – mostly to see what’s resonating for people and what isn’t. Every so often, a reviewer will actually educate me about my own book, and that’s almost always welcome.

AUTHORLINK: That’s brilliant. So good to know! What is your writing day like? How much time is allocated to researching? Do you aim for a set amount of words/pages per day? How many times does your manuscript get edited by your agent and then again, by your editor at your publishers? Or does it vary on the books and the publisher?

BAYARD: I spend two to three months up front just doing foundational research – getting to the place where I can walk around in a particular world. And then, as I write, I learn what I still need to know, which is often considerable. The whole process takes two years on average. I wish I could winnow that down, but I can’t seem to.

As for my daily routine, I try to devote at least the first two to three hours to fiction. I’m not a particularly fast writer, so if I can push out 500 words, that’s a decent output. A 1,000-word day is welcome but rare. I’m revising as I go along, so whatever I submit to my publisher will be more like a second or third draft. From there, maybe another two to three revisions – until I get to the point where I can’t even look at the thing. I love that line of Valery’s: “A poem is never finished, it’s only abandoned.”

AUTHORLINK: And now for a few light-hearted questions:-

AUTHORLINK: Haha, that’s great. Mr Bayard, it was such a pleasure talking to you today. Thank you for your time and all the best for your future books!

About the Author: In the words of the New York Times, Louis Bayard “reinvigorates historical fiction,” rendering the past “as if he’d witnessed it firsthand.”

Louis’ affinity for bygone eras can be felt in both his recent young-adult novel, the highly praised Lucky Strikes, and in his string of critically acclaimed adult historical novels, which include Roosevelt’s Beast, The School of Night, The Black Tower, The Pale Blue Eye and Mr. Timothy.

A New York Times Notable author, he has been nominated for both the Edgar® and Dagger awards, and his story, “Banana Triangle Six,” was chosen for The Best American Mystery Stories 2018. He is also a nationally recognized essayist and critic whose articles have appeared in the New York Times, the Washington Post, the Los Angeles Times and Salon. His other novels include Fool’s Errand and Endangered Species (Alyson).

An instructor at George Washington University, he is on the board of the PEN/Faulkner Foundation and was the author of the popular Downton Abbey recaps for the New York Times.

Tell us what you think. Is COURTING MR LINCOLN among the best historical novels you’ve read lately? 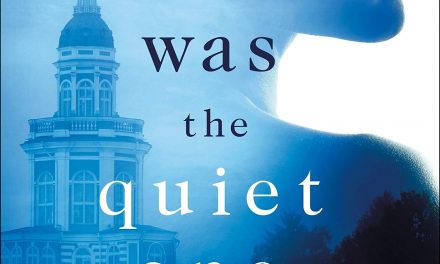 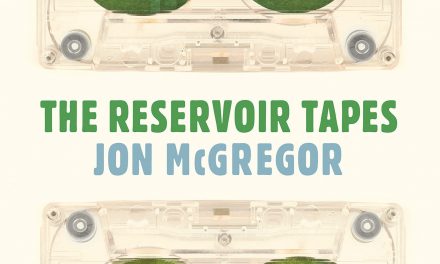 McGregor’s The Reservoir Tapes: A Dazzling Feat of Art