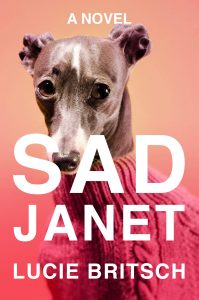 Janet has a live-in boyfriend, a job at a dog shelter in the woods and a mother who depends on prescription drugs to make it through her life. None of this makes Janet particularly happy. In fact, Janet basically defines herself as sad, which doesn’t particularly bother her. What does particularly bother her, is other people trying to change her, especially during the stressful days leading up to and on what is supposed to be the happiest day of all – Christmas – which at this point is 181days away. So now, people tell her, there is a drug made just for her, and all the other Janets. The miraculous Christmas pill will ease their journey through the holiday season. Despite her feelings about her mother’s dependency, and distrust of Big Pharma, Janet accepts the prescription for the drug. Where this all leads Janet is not quite the promised outcome.

AUTHORLINK: What came to your mind first about this story?

BRITSCH: I had a few bad Christmas’s where I didn’t really feel that happy and I thought if there was a pill that would make me feel happy but just for Christmas, I would probably take it. I also have bi-polar but am not medicated, but I always feel like I probably should be but don’t want to be because this is just who I am. I want people to be who they are.

AUTHORLINK: Are you maybe kind of a Janet yourself? Comments in your acknowledgements made me wonder.

” Janet is a heightened version of me probably.”

BRITSCH: Yeah. Janet is a heightened version of me probably. But I’m lucky enough to have a few great people in my life that do let me be who I am. It’s about finding your people.

AUTHORLINK: Did you worry that it would be hard to get a book published about someone described as sad? How did you pitch it?

BRITSCH: I didn’t worry, I just wrote it and hoped other people would get it. It’s one woman’s story. Sadness is something I feel is fundamental to being human, but we try to cover it up a lot of the time. We need to embrace it. I pitched it for what it is, one woman’s battle against a world that wants her to be a different way, wants her to conform, even with her feelings.

AUTHORLINK: Do you think that if people would just stop nagging them or trying to foist other expectations on them, people like Janet (or people with other ways about them that are different) would be “happy” being “sad” or at least feel okay with themselves?

BRITSCH: I feel like if there wasn’t so much pressure to be a certain way or feel a certain way, we’d be happier in our own skins for sure. I’m really into the idea of the happy existentialist, where we get to a place where we accept there aren’t any answers, or any real meaning to it all, so we make our own and get on with it. Being human is really hard, I think we need to be kinder to ourselves, we’re all just muddling through.

AUTHORLINK: Then there is Janet’s big bugaboo – Christmas. Why is Christmas such a problem for Janets?

“It’s this forced happiness that isn’t good for anyone.”

BRITSCH: I think it’s to do with how much pressure there is surrounding it, how much build up, the expectations. If it was just a few days it would be fine but it’s weeks now, months even. It’s this forced happiness that isn’t good for anyone.

AUTHORLINK: Your story also takes a stab at Big Pharma and people’s tendency to want to take a pill for everything. We know how Janet felt about that. How do you feel?

BRITSCH: I think we’re dangerously close to living in that world. I think people want a quick fix for everything and there’s always someone there that wants to cash in on our feelings and perceived flaws. I get it, it’s all exhausting, we all want to feel better, but it’s this eradicating of normal feelings I worry about. It’s normal to feel sad, the world is sad. I want to feel everything.

AUTHORLINK: A couple of questions about some details – Janet always thought “my boyfriend,” never his name. A character in another story I read (Stay and Fight by Madeline Ffitch) did the same. Why no name?

BRITSCH: None of the men in the book have names because this is a book about women, about how for centuries men have tried to control our bodies and minds. I wanted the men to take a back seat this time. My next book has two central male characters with names, don’t worry, I do know some men’s names.

AUTHORLINK: Why did you choose to leave out quotation marks?

BRITSCH: What is the deal with this? I read so many books without quotation marks. I don’t get why people need them, seems a bit babyish to need someone to tell you when someone is talking. I don’t ever write with them because it feels clunky and my editor didn’t put them in, but I wouldn’t have really cared either way. Get over it.

BRITSCH: I’ve already finished two other novels and am working on a fourth and fifth. It’s taken me a long time to get here so I’m making up for lost time.

About the  Author: Lucie Britsch’s stories have been published in Barrelhouse, Catapult Story, Vol.1 Brooklyn, and The Sun. She has been nominated for a Pushcart Prize. Her debut novel, Sad Janet, was named one of the Best Books of the Summer by LitHub, The Millions and others.

Ackerman’s Dark at the Crossing, a Journey of the Heart

How to Solve Conflict By Changing the Conversation-2015