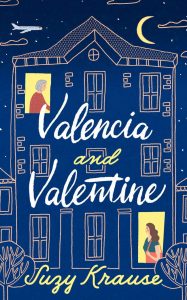 Working over seventeen years as a debt collector, suffering a lifetime with crippling OCD, Valencia approaches her thirty-fifth birthday with trepidation. She longs to break free of her self-imposed prison, but her mind and guilty conscience won’t allow it. It’s only when the boring same-old call center staff are shaken up by two new arrivals that Valencia finds a small spark of resistance to her condition. Peter is handsome and caring and seems interested in her. Grace is a friendly force of nature–everything Valencia isn’t. Then there’s the mysterious James Mace, a phone-in creditor who amazingly seems to have developed the hots for her.

…a beguiling and charming first novel…

Mrs. Valentine is eighty-seven and knows she’s not long for this world. Her main interest is death and how to deal with everything leading up to it. Longing for company, she is thrilled when young Anna begins work as a cleaner and is willing to listen to her stories. Mrs. Valentine recounts tales from the time she reached her mid-thirties and traveled on a whim from her native Saskatchewan to New York City. There she met and fell in love with Mr. Valentine. They were married for four years and traveled the world before he mysteriously disappeared in Bolivia. Even after many years have passed Mrs. Valentine doesn’t believe he’s dead. Valencia and Mrs. Valentine appear to be so far apart, yet their worlds are going to collide in unexpected ways.

Valencia and Valentine is a beguiling and charming first novel by Suzy Krause.

Things Half in Shadow by Alan Finn