The Great Alone by Kristin Hannah 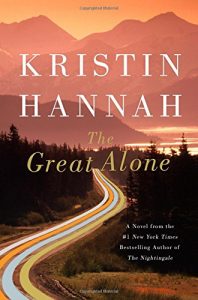 The austere beauty and unforgiving winters of Alaska’s outback further unravels the already-fragile and violent life of the Allbright family in Kristin Hannah’s novel, “The Great Alone.” It’s enlightening, and disturbing, to watch as Hannah’s tale of war trauma and domestic violence unfolds.

The novel focuses on Cora, a pregnant teenager who marries Ernst, who after the birth of their child, Leni, is dispatched to Vietnam. He’s subsequently captured, held as a prisoner-of-war and tortured. When he returns home, Ernst has changed, susceptible to horrific nightmares, and he begins violently beating Cora, who makes excuses for his behavior.

When Ernst is gifted property in Alaska by another former Vietnam POW, he moves the family to a remote village on the Kenai Peninsula. They find themselves ill-prepared for harsh winters, but get help to survive from others in the isolated community. Alas, the Allbrights’ hope for a new tranquil life off-the-grid life fails. As winter darkness arrives, Ernst becomes even more violent. Cora’s and Leni’s misguided love for Ernst and their frightened search for safe escape is the core of Hannah’s breathtaking story.

In her romantic description of Alaska, she depicts Leni as a warrior who can at age 17 bag a Dall sheep. After she field dresses her kill, she carries it in her backpack on top of a log over an icy river, and then walks in snowshoes to her snow machine.

Meanwhile more tension builds when Leni falls in love with Matthew Walker, whose grandparents homesteaded the area during the Depression. The Walkers are wealthy, and the bane of Ernst who is filled with jealousy.

One can’t minimize Hannah’s ability to spin a dramatic story and paint a vivid description of Alaska’s landscape. But while the exploits of Leni provide the saga with a hero, it’s hard to believe a 17-year-old could achieve such a feat. Still, the novel offers suspense, and awe of human survival. It also sheds light on Post Traumatic Stress Disorder, and how laws at the time failed victims of domestic violence, both timely topics.

A Gentleman’s Guide to Graceful Living by Michael Dahlie

The Fifth House of the Heart by Ben Tripp