A Book of Bones by John Connolly 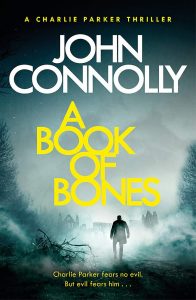 A Book of Bones

PI Charlie Parker has unfinished business. The destruction of the evil Familist cult’s church in the backwoods of Maine during his last adventure uncovered the scent of something far worse, something that threatens the nature of the world itself. The agent of change is an English lawyer by the name of Quayle, aided and abetted by the assassin known only as Pallida Mors—Pale Death. Quayle has lived far beyond a human’s normal lifespan, living for centuries in his obsessive quest for the Fractured Atlas, the book that could unmake the world. Now he seems close to his objective, and Parker must stop him before it’s too late.

. . . tension never lets up in this elegant merging of crime noir and Gothic horror.

Aided by his friends Angel and Louis and book antiquarian Bob Johnston, Parker’s search for Quayle takes him to the Netherlands then England. A British police investigation into a series of brutal murders that seems to be linked to Muslim extremists turns out to have sinister occult overtones. Is there a link to Parker’s search or is someone just trying to muddy the waters? The body count rises as Parker and his friends close in on Quayle, but their superannuated quarry—and his tame assassin—will not go quietly.

In A Book of Bones, Connolly once again displays his masterly understanding of humanity. Good or bad, each character is drawn with a consummate touch giving depth and reason to their interaction with their world. From the heart of London to the final showdown in a rural English village, the tension never lets up in this elegant merging of crime noir and Gothic horror.

Dinner with Churchill by Cita Stelzer

The Master of the Prado by Javier Sierra