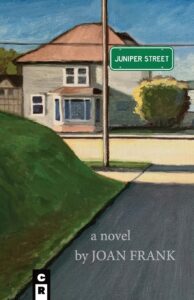 Joan Frank’s latest work Juniper Street offers a visceral portrait of female friendship and it’s after effects. Told in a series of short snapshot-like vignettes, we accompany the protagonist through an adolescence marked by loss, secrets and a strong bond with a girlhood friend named Mary. As the protagonist grows up and moves into adult life, she is marked by the memory of the powerful friendship and what has become of the girl she never thought she would leave behind.

AUTHORLINK: Tell me about your apprenticeship as a creative writer. Did you have a mentor who offered advice that has stayed with you that you can share with us?

” I began writing via journalism…”

FRANK: I began writing via journalism: first making feature articles, then personal essays for metropolitan dailies, Sunday magazines, and women’s “slicks.” When I sensed these pieces (however clever) were dwelling mainly ‘at the surface of things’ I knew—felt driven by the need—to go deeper. A short story extension class at UC Berkeley ultimately led to an MFA degree (Warren Wilson College in North Carolina). The astoundingly gifted Berkeley author Thaisa Frank (no relation) was a very early, formative mentor and is now a very dear, fast friend.

AUTHORLINK: James Dickey said the idea for Deliverance came to him as a vision of a man standing alone on top of a mountain. His job was to get the man off the mountain. Where did the idea for Juniper Street come from?

FRANK: There was no single image. Instead, the memories of that period in my own life and its principles lay dormant for years, suppressed because they (the memories) were painful and chaotic.  I had jotted notes, but could not make these jottings stand up and walk around. That came later.

AUTHORLINK: The short vignettes that make up the book have the feeling of looking at pictures. They are snapshots of meaning. Why did you decide to tell the story in this format?

FRANK:  I understood that if I could break the memories down into very brief bites, I could somehow overmaster the pain long enough to get a grip on them and begin laying them down to form a whole, just like small pieces of mosaic. The fact these short chunks have struck you as pictures, makes me very happy. Thank you.

AUTHORLINK: How long did it take you to develop and shape Juniper Street?

FRANK: I held onto those above-described notes for perhaps 30 years. I would doodle at them sometimes—but soon ran away in confusion and pain. During the short moments, I was able to stand it, I would work on them as an alternative to, or between, other projects.

AUTHORLINK: The book is also about memory and how it works to shape our perceptions differently through time. What other literary works of memory did you draw from when developing the book?

FRANK: No single work was foremost in my head during Juniper’s writing, but please know I never stopped devouring bazillion first-person accounts (both fiction and nonfiction) and have been under those spells all my reading life. I think of Nabokov’s Speak, Memory, Richard Rhodes’ A Hole in the World, Kinkaid’s Annie John, McGahern’s All Will Be Well, Annie Dillard’s An American Childhood, Joel Agee’s Twelve Years, Truman Capote’s Christmas Memory and above all William Maxwell’s So Long See You Tomorrow—a perfect jewel which remains iconic for me—hundreds and hundreds more. Each of these entered my heart to stay and taught me the irrefutable, electrifying reverberance of brave truth.

AUTHORLINK: Juniper Street is a story of the strength of young friendship and its power even after it fades. Could you discuss how that drove the story?

FRANK: It is striking me powerfully now that friendship forms a country of its own, perhaps the first and final frontier. Its magic and miracle are that it is chosen: not mandated by law or culture. Thus, it’s a willed gift by people between themselves. At the same time, it’s excruciatingly vulnerable, idiosyncratic, and mutable as hell. I wanted to expose the acute sweetness of early versions, like that between the protagonist and Mary.

AUTHORLINK: What were the greatest challenges when writing Juniper Street and how did you overcome them?

FRANK: Greatest challenge? The pain. For the longest time, it felt overwhelming. I finally figured out I could scuttle around this by going at the making in very small pieces, as I described above. Recommended.

AUTHORLINK: Talk to me about your revision process when working with your editor. Any tips?

FRANK: I worked with one of the two gentlemen who run C&R Press. He had mild suggestions for slightly deepening a bit of dialogue or clarifying a detail. That suited me fine. My entire oeuvre comes from small presses, which usually cannot provide more than a thoughtful copyeditor. Thus: when work’s complete I usually ask one other trusted pair of eyes to absorb and comment on it. I reserve all rights to stand by what I’ve made.

“To protect your tender writing-making guts, continuously toughen your skin.”

FRANK: I will be blunt here. The industry, as we’ve no choice but to call it, is harsh. Be—or become—very, very clear with yourself about why you must do it. Constantly clarify as best you can what you want for it, and for yourself. Repeatedly refresh this understanding. Make the very best work you can—but once it issues, groom and modify your expectations for it according to the industry’s landscape and weather. To protect your tender writing-making guts, continuously toughen your skin. What saves us from madness is to keep ingesting the beautiful works that nourish and inspire. I believe in Believers, and dare still call myself one.

FRANK: Two possibles: one, a new collection of novellas (I have a collection now in the world called Where You’re All Going: Four Novellas, which won the Mary McCarthy Prize in Fiction from Sarabande Books.) The other I cannot speak about for superstitious notions. Thank you for asking these lovely questions.

Joan Frank (www.joanfrank.org) is the author of thirteen books of literary fiction and nonfiction. Her newest works are Juniper Street: a Novel, winner of the C&R Press Fiction Prize, and the essay collection Late Work: A Literary Autobiography of Love, Loss, and What I Was Reading, from the University of New Mexico Press. A MacDowell Fellow and recipient of many honors and awards, Joan also reviews literary fiction and nonfiction for the Washington Post, Boston Globe, and other venues. She lives in California’s North Bay Area.

Douglas Kennedy Explores The Moments That Change Us Forever

THE STORY OF MY LIFE: Mercedes Florencia Brudnicki