The Seneca Scourge by Carrie Rubin 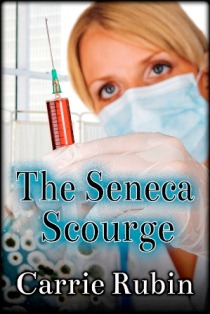 The Seneca Scourge (Whiskey Creek Press) A young physician, caught up in the worst influenza pandemic of all time, teams up with a mysterious new research virologist, whose motivation to contain the deadly virus may prove different from her own.

Thomas Lamb once read somewhere that a human sneeze sprayed thousands of germs at one hundred miles per hour up to twelve feet away, the particles lingering in the air for minutes, waiting to be inhaled. If that were the case, he pitied his fellow passengers.

Using his dark slacks for tissue, Thomas wiped the mucus off his hands, then brushed crumbs from the tray table and leaned back into the cramped chair. He ignored the sideways glare from his seat companion and closed his eyes. He felt awful. The cold started yesterday—nothing major, just some sniffles and a dry cough—but today it escalated. Now his entire body ached, and he suspected a fever. At least the Nairobi to London flight was over, and in a few hours he’d be back in Boston, and another short commute later, his coastal town of Seneca.

If only the coughing would stop. He’d been pretty embarrassed at London Heathrow, especially that last sneezing fit where he had to give up his seat and rush to the bathroom for more toilet paper to wipe his nose. He’d half expected the Japanese tourist on his left to snap his photo, and if not him, then surely the Australian tour group one row over. But Thomas wielded no control. Every time he finished with one coughing or sneezing bout, another one surfaced. Luckily, he’d been able to contain himself through customs or they might not have let him board. And damn if he wasn’t getting home.

He closed his tray table and started flipping through the lecture notes he’d drafted on the earlier flight, but his exhausted brain refused to follow. Looked like his geology students would have to get by without him for another few days. He filed the notes back into his bag, then excused himself and headed to the bathroom for one last stop before landing. On his way he stifled another cough and smiled at an attractive Middle-Eastern woman with a young child on her lap. The little boy smiled back, and Thomas knelt down to shake his hand, thinking of his own son stationed in Afghanistan.

After a brief exchange with the mother, Thomas proceeded to the bathroom. When he finished, he reached for the soap, saw it was out, and skipped the water altogether. Coughing, he made his way back to his seat, squeezing past a South American flight attendant and a jersey-clad Canadian student.

Finally, he slumped back into his seat, closed his eyes, and took a big breath.

About the Author
Carrie Rubin

'Best New E-book: Fiction' Winner in The 2012 USA Best Book Awards. Carrie Rubin is a physician with a master’s degree in public health. In addition to writing fiction, she maintains a humor blog at www.carrierubin.com. She lives in Ohio with her husband and two children. “The Seneca Scourge” is her first novel.

"‘The Seneca Scourge’ by Carrie Rubin was impossible to put down.”—Trudi LoPreto for Readers Favorite “I love, love, love, LOVED this book. 4 out of 4 stars…well written, well thought out, well planned, and just a great book altogether.” —Online Book Club "‘The Seneca Scourge’ by Carrie Rubin is a first-rate medical thriller that includes totally believable science fiction elements. The story is filled with great suspense and action and characters that will engage the reader from the story's beginning to its conclusion.”—Alice DiNizo for Readers Favorite.

For more information on THE SENECA SCOURGE see http://carrierubin.com/novel/